I have an interest in all things Korean, ranging from the language to the drama to—of course—the food!

Aside from its entertainment industry, South Korea’s dishes are quite popular as well. It’s spicy and tasty. It makes a good meal as well if you want to try something different. Life is about new experiences after all. One of the new experiences you can do? Trying new dishes! Especially for those who like spicy food, you probably wouldn’t want to miss these out! Shall we take a look at the food down below?

Oh, please, who doesn’t know kimchi? When you heard the word kimchi, you’d automatically think it’s Korea. Kimchi is basically pickles with chili. It’s delicious and healthy! Well, maybe I should elaborate a little more about kimchi. Kimchi is salted and fermented vegetables such as radish and nappa cabbage. It’s made by Koreans during winter so the vegetables would be able to last until summer. At first, kimchi doesn’t include chili peppers. But in late 16th century, Portuguese introduced chili peppers and since then, chili peppers are used widely in various dishes. Kimchi is eaten as side dishes. But that doesn’t mean you have to do that all the time! You can make Kimchi soup. You can even grill it as well. Another popular dish made of kimchi is kimchi fried rice.

This is the favorite Korean’s street food! I’ve tried it before, twice in fact. Once, I tried it in a restaurant. Not in Korea but some other country. It was bad. Really bad. My friends didn’t even finish it. Some time passed and I have this idea that ddeokbokki tastes horrible. One day I went to Korea and my sister asked me to buy ddeokbokki. Tell you what, ddeokbokki is actually delicious! I understand why Koreans love it so much! With its spicy paste and chewy rice cakes, they make a great combination! You need to try if you go to Korea.

Another popular Korean dish is bibimbap! It’s usually served in a bowl. Bibimbap is rice stacked with meat and vegetables on top. Then what’s left to do is mix it with the spicy Korean paste! Yummy! It’s not a complicated dish so it’s practical to eat. It’s one of the Korean food you should definitely try. Fun fact: the ingredients in bibimbap symbolize something. For example, the each colors in the dish symbolize directions or human’s organs. Black symbolizes North and the kidneys. Yellow symbolize the center or stomach. Red and orange are South and heart. Green symbolizes East and liver. White is west or lungs. It’s rich in nutrients. Interesting, no?

Bulgogi is one of the tastiest meals you can find in South Korea. It’s meat, guys! Thin slices of tasty marinated beef or pork . . . hmm, who wouldn’t be tempted? It’s similar to barbeque but Korean version. I’m sure this food will suit foreigners’ taste. This time, it’s not spicy. But still, bulgogi is a dish worth trying. Koreans usually eat it with celery. They wrap the celery around the meat and eat it with rice. It’s also popular in North Korea as well. In fact, it originated from North Korea.

Korean’s noodles dishes are not only ramyeon. There’s japchae as well and it’s just as delicious. The noodles are different the usual yellow, curly noodles. It’s made of sweet potato noodles stirred with vegetables and meat. The noodles are straighter and look like vermicelli. Just thinking about it makes my mouth water. It can be served cold or hot, maybe it depends on the seasons. It’s a common side dish. It might be weird to westerns but Koreans eat it with rice. Rice is a must in Asian dishes.

Another popular noodle dishes from Korea, jjajangmyeon! It’s a dish made of noodles with black bean sauce on top. There are other ingredients as well like pork and vegetables. It is said that your mouth produces more saliva when you eat jjajangmyeon. There’s an explanation behind that though I can’t find it anywhere on the internet. Perhaps it’s because you need to chew a lot and chewing caused your mouth to produce more saliva. Anyway, unlike the other Korean dishes, it’s sweet. So, those who like sweet food, jjajangmyeon is the right Korean food for you!

Korean stew or jjigae is a soup type of dish. It’s similar to western stew except it’s spicy. Usually, the dish consists of vegies, meat, broths and of course, kimchi! There are different types of Korean stew, from kimchi stew to army stew. All is delicious in my opinion. You can add ramyeon as well. It’s served in hot boiling pot. It’s the perfect dish for winter!

Gimbap is similar to sushi in a lot of ways. It’s rice wrapped in seaweed with fillings in the center. You can put almost anything, from carrot to sausage. But there’s one exception: it doesn’t include raw fish like sushi. People usually bring it as lunch for picnic. Well, it’s a practical food.

It’s Korean pancake. If you think it’s the regular maple syrup pancake, then you’re wrong. It’s very different in fact. It’s more similar to okonomiyaki from Japan. Instead of tasting sweet, Hameul Pajeon is tasty. Since it’s a seafood vegetable pancake, there’s seafood in it! You can put anything, from squid to oyster. It’s up to you. You can add any seafood you want. It’s so easy to make. You just need tempura powder, water, egg and the fillings. Interested?

I was tempted to write the subtitle as ramyeon but then, I remembered there’s samyang too. Korean dish that you can make anytime is instant noodles. You can find it in the nearest supermarkets. You can order it online too! What’s more, instant noodles are very tasty. My favorite Korean instant noodles are shin ramyeon, sutah and neoguri. You can add stuff like rice cakes and egg in the soup. Oh, and Samyang is definitely my favorite as well. It’s so spicy, no kidding. In no time, you’d be seeking for drinks. My advice when you eat samyang is eat it fast! Don’t drink cold drinks because it will make your mouth spicier. Opt for warm water instead. You can add cheese as well if you can’t handle the spiciness. After eating samyang, your lips will be very red. Trust me. But that’s the excitement of eating samyang. 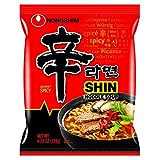 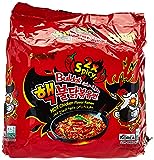 So there you go, top 10 Korean mouthwatering dishes! Do you have any other recommendations? You can always share it in the comment section. After all, everyone’s opinions are different. If you haven’t tried the above, you should definitely try those! It’s really good and you won’t regret it, trust me. From time to time, you need to taste something different, right?