Watermelons, Fruit or Vegetable? All You Ever Wanted to Know Including Recipes

Thelma Raker Coffone is an award winning writer who enjoys writing on a variety of topics, especially those honoring Veterans.

Most people are amazed to learn that watermelons are actually vegetables and not fruit! Originally grown in Africa but now farmed all around the world, the watermelon is part of the gourd family and is related to cucumbers and pumpkins.

This popular vegetable (I still can't get used to calling it that!) matures about 3 months after being planted with the peak season being from mid June to late August. July is National Watermelon Month according to the Watermelon Promotion Board. Forty-four states produce watermelons with the leading states in production being Florida, Texas, California, Georgia and Arizona and the United States ranking 4th in worldwide production. They are the favorite melon of consumers followed by cantaloupe and honeydew.

Tips on Selecting and Storing

My father taught me at a very young age how to pick out the right watermelon. He was a firm believer in the "thump" method of watermelon selection. You thump the melon with your fingers and listen for a dull hollow sound. It worked every time! Other folks swear that a melon is ripe when the side that grew against the grown is a creamy yellow color, NOT white or light green. If the stem is still attached, it should be brown and dry.

Some like to eat their melons icy cold while others enjoy them served at room temperature. Store cut watermelons in the refrigerator and cover the cut surface loosely with plastic wrap.

Watermelons are Good for You!

Not only do they taste good but they are good for you too. Low in fat and cholesterol, they are a good source for vitamins A, B6 and C, and amino acid. They are considered to be the "Lycopene Leader" in fresh produce, having higher concentrations of lycopene, a powerful antioxidant, than any other fruit or vegetable, even tomatoes. A 2 cup serving of watermelon contains 16mg of lycopene while a medium sized tomato contains only 4mg. That same size serving has only 80 calories and is 92% water.

Some watermelons grow to be 100 pounds. The Guinness Book of Records lists the largest watermelon at 262 pounds grown in Arrington, Tennessee in 1990.

The entire watermelon is edible, not just the delicious red center. The rind can be used to make tasty pickles and the seeds can be roasted in the oven and eaten.

Watermelon producing states each have a yearly ritual of selecting their own "Watermelon Queen" who travels the US to promote the vegetable (I REALLY can't get used to calling it a vegetable).

Have you ever seen a black watermelon? Check out the article at http://hubpages.com/hop/#/The-Lulawissie-Black-Ball-Watermelons for pictures and information on this unique watermelon originally from Japan and now grown in Georgia.

Watermelon is so much more than just a refreshing treat at a picnic. This cranberry sauce recipe demonstrates watermelon's versatility:

Heat cranberries, sugar, vanilla, lemon juice and zest in a 3 quart saucepan over medium low heat until it simmers. Simmer gently, stirring occasionally, until cranberries are tender, about 15 to 20 minutes. Reduce heat to low and add cinnamon. Simmer another few minutes. Remove from heat to rest for 10 minutes. Stir in watermelon. Mix well and chill. Serve cold. I like to add chopped pecans or walnuts but that is strictly a matter of taste and keep in mind some people can not eat nuts.

How do you Rate the Quick & Easy Watermelon Pie Recipe?

5 stars from 1 rating of Watermelon Pie

Fold together milk and topping. Add lime juice. Fold in melon balls, reserving about 5 balls for a garnish. Pour into crust. Place remaining balls on pie to garnish. Chill for 2 or more hours before serving.

Watermelons Getting Ready to Ship for July 4th

A check with watermelon growers here in Georgia indicates that the melons should begin to peak about June 15th to 18th and there will be excellent supplies. The hot, dry growing conditions in Georgia will provide high-sugar watermelons and there will be plenty of melons this year although they may be a little smaller in size. 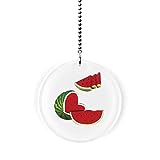 Decorate with a Watermelon Theme

If you are looking to spruce up your kitchen, think about decorating in a watermelon theme. There are so many beautiful items to choose from as you can see by the items shown here. And red is such a wonderful color to brighten up your kitchen!