What's in the Meat We Eat at Fast Food Restaurants?

What have they done to the meat lately?

I remember as a kid growing up in the 80's Arby's & Taco Bell were my favorite fast food restaurants. But lately I have noticed a difference in the way the beef taste. Taco Bells meat seems to have a funky wanky taste. Arby's roast beef has lost all of its flavor. Which makes me wonder what happen to the great taste of my favorite restaurants? That's when I began researching what's in the meat. To get some idea if they took something out that changed the flavor.

What are we really eating?

Beef for fast food hamburgers comes from large slaughterhouses that are often very secretive about their procedures. Meat from many animals is mixed together in a single process. For this reason, it is likely that a single fast food hamburger contains meat from hundreds of cattle. The meat is all processed together so one ill cow could contaminate the entire batch of meat being produced.

There are also many concerns about the diets of the animals in these plants. In many mass production plants, cattle feed may include ground animal remains or even animal manure. This process is thought to contribute to the prevalence of bovine spongiform encephalopathy (mad cow disease) and bacteria like e. coli or salmonella.

In order to kill off e. coli and other bacteria, ammonia is sometimes added to the meat. This is the same chemical found in many glass cleaners. This substance is referred to as a "processing agent” and the process is currently approved by the USDA. Tests have also revealed that in many cases the process does not kill off bacteria.

Due to the amount of processing, chemical additives must be put into the meat to create the taste of actual beef. MSG is a common ingredient that is used to boost flavors in fast food. The term "natural flavors" in an ingredients list is typically a code for soy, gluten, or a combination of modified plant proteins. People with food sensitivities should be very careful consuming fast food.

In addition to the many chemical additives and animal by-products that may be making its way into fast food meat, fast food is also loaded with trans fats. These are the fats that are most likely to contribute to heart disease and have been removed from many grocery store items in recent years. Fast food chains continue to use oils and chemicals high in trans fats.

Mcdonald's shows its ugly side.

Amazon has the meat. 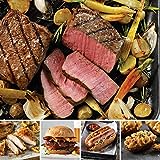 How often do you eat fast food?