A low-carbohydrate, grain-free diet has put my diabetes in remission, and I believe it can help you too.

Modern wheat has been so extensively hybridised for yield, ease of growing, pest resistance and so much more that it scarcely recognisable from early forms of the grain. Even the wheat that was grown in my childhood was a completely different thing. To walk through a field of wheat was an adventure for a child even if you didn’t play hide and seek games and for slightly older kids it was a haven where you could hang out or make out hidden from prying eyes. As stalks became shorter and grains became larger there was more lost than a backdrop for amorous adventures.

Gluten intolerance and coeliac disease, almost unknown in the fifties and sixties, became commonplace. Wheat has become a monster with more chromosomes than human beings, its chain carbohydrates break down into glucose before they even reach the stomach causing massive sugar swings, its proteins, once sustaining, have now become irritants and to be frank most people are better off without it. Try telling that to any bread, pie, pasta, cake and pudding addict and you’ll be given short shrift however. I know. Going grain-free has liberated me. I can eat so many once forbidden foods, I no longer have to count calories or portion sizes, I hardly ever feel hungry, I have lost over three stones in weight and have put both diabetes and high cholesterol into remission in just over one year.

Bring On the Criticism...

Then Christmas comes and the annual food binge offers those seasonal delights, beautifully decorated cakes and pastries, Christmas pudding, mince pies, pumpkin pie and Christmas cake, not to mention bread sauce and turkey stuffing. You know, they all say:

“No thanks, I know this stuff. Three Richmond sausages or a slice of toast will cause so much inflammation that I’ll put on five pounds and have tummy pain for a week.”

“Food fascist! Stop boring us will you!”

(Yes, a relative was very rude and did say that on Boxing Day)

“Please yourself” (OK, maybe not quite those words, but...)

I know the effects of wheat now and I am so glad all my blood tests came back in the ideal range this August. Why sacrifice it because someone calls me a Fascist? Why keep the benefits secret? I don’t want diabetes, heart trouble or dementia and neither should you. Only you can say if changing your way of eating is worse than suffering ill health or putting yourself through a constant Hell of gym exercises, portion watching and calorie counting to compensate for poor eating habits and even then just feel so-so.

Enough of the background, you came for a recipe and here it is. First of all, the basic one:

This was the first one I tried and the first “grain-free” bread that tasted anything like bread. It does contain oats, which is forbidden on the Wheatbelly diet, but I have found I can eat oats and they are good for your heart so I have them in moderation. If you are gluten intolerant rather than wheat intolerant (or just eating for good health) you can actually get gluten free oats. It also contains soya flour which is frowned upon by the Wheatbelly lobby because it contains lectins and is hard to guarantee as not genetically modified but I use soya flour to up my protein as I prefer not to eat meat every day. There are a lot of very healthy people in Asia who have eaten soy products for generations. You see? I am not such a Fascist after all.

Soda Bread Ready for the Oven

This is the fun bit! In theory, this takes thirty to forty minutes on 200 Celsius/390 Fahrenheit/Gas 6, but in practice you will burn it. A lower temperature will not always cook all the way through grain free bread however. The reason for this is that coconut flour cools when it absorbs liquid. (Actually, if you work a coconut flour based cookie dough into balls you can feel it chilling your skin, it’s weird). So we have to adapt, roll with it and check often. Start with the higher temperature to get over the cooling mix. After fifteen to twenty minutes, you MUST check the bread. If it has risen properly and browned, carefully cover the top with foil, then you need to turn the oven down to 150 Celsius/ 300 Fahrenheit/ Gas 3 and give it a further 20-30 minutes. Check it with a skewer after that. If the skewer comes out clean then allow it to cool on the rack. If not, give it a little longer. I usually leave mine to cool along with the oven. It should peel away from the parchment quite easily once cool and will sound hollow if you tap the bottom.

Grain Brain - the Book that Could Change Your Life 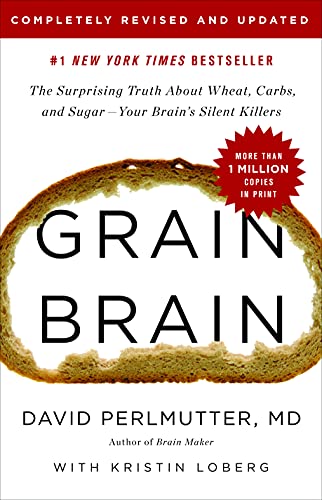 Grain Brain: The Surprising Truth about Wheat, Carbs, and Sugar--Your Brain's Silent Killers
This book, together with Dr William Davis' Wheat Belly books, has certainly changed my life. I was diabetic, overweight, dogged by tiredness and brain fog. I read this and thought "I don't have to put up with this". Now I am three stones lighter, happier, fitter, mentally sharp and my blood results are all in the ideal range. Wheatfree life is not just for coeliacs!
Buy Now

Now you can add fruit to Irish soda bread and it makes a festive gluten-free treat that I prefer to cake. This is relatively low in carbohydrates and high in protein which makes it much better for diabetics than the traditional wheat version. No, it's not zero-carb because of the fruit but it is a festive occasion! I shared this on my blog for friends and I am still playing with variations on the theme but we had this on Christmas Day instead of Christmas pudding and it was lovely with whipped cream and brandy sauce. You can definitely add more sweetener if you have a sweet tooth, maybe four tablespoons to start with and go up from there; you can use any festive spices, ginger, nutmeg, cinnamon or a mix; any dried fruit mix is fine, just sultanas or regular cake mixed fruits or even add a few dried cherries; arrowroot is a pure grain-free starch and softens the consistency but you can leave it out to be more keto or low carb compliant; substitute another ½ cup almond flour for oats for to be totally grain free. The milk I always use is lacto-free so it’s OK if you’re lactose intolerant and mixing milk with lemon juice gives you a close approximation to buttermilk that really works.

Soak the dried fruit in spiced rum, stirring it occasionally so all of the fruit absorbs the rum liquid and flavours. Try not to drink the rest of the rum. ;)

See above and cook as for plain soda bread recipe

Would you like a slice with your Gaelic coffee?

warm or cold with whipped cream and/or brandy sauce.

(I make mine with a cup whole milk, three teaspoons of stevia and half a cup brandy and use arrowroot as a thickener).