What to do with Mushrooms

Nobody is ever half hearted about Mushrooms

Mushrooms have played a pretty important in human history. Claudius, the Emperor of Rome, was poisoned by mushrooms, as was Pope Clement VII. The Normans praised their aphrodisiac qualities, the ancient Egyptians decreed them to be food for royalty alone and a 5,000 year old corpse had some versatile polypores in his backpack.

These days truffles, porcini, morels, crimini, ceps, portabella, black Chinese, yellow chantarelles, cinammon caps, hon-shimeji and their cousins are no longer seen as either the food of gods or of devils.

A mushroom is a healthy wholesome and altogether delicious treat.

There's a lot of food value in a mushroom

Depending on the variety, mushrooms contain 1 to 3% protein and all the essential amino acids, making the protein complete. You wouldn't think so to look at them but, for vegetarians, mushrooms make an ideal meat substitute. A tasty substitute too.

Mushrooms also have many of the B vitamins, and the vitamins C, K, and E.

Take the portabellas for example. Portabella Mushrooms are an ideal food for those watching their waistlines. They contain no fat or sodium, are high in fibre, and low in calories (40 calories for a medium size).

Always be careful when you harvest wild food

Many people prefer wild mushrooms, I do too. They really taste so much better as the flavour is so much stronger.

Be careful when picking wild mushrooms, or any wild food. Some species of mushrooms are poisonous.

Remember to always cook wild mushrooms thoroughly, no half measures here, you not only want to release the flavors but to convert the proteins into a more usable form

* Remove the plastic from packaged mushrooms

* Avoid air-tight containers which cause moisture condensation and spoilage

* Don't rinse until ready to use

Prep Time: Marinate for 10 hours, then prep for 10 minutes

To Scrub or not to Scrub a Mushroom?

You don't have to peel your mushrooms. Wash them briefly under cool water, then give them a few minutes to dry off themselves.

To remove the stems, give them a gentle little push with your thumb and they will loosen easily. Keep the stems for adding to soups, stir fries, and stuffing.

The true aficionada doesn't wash her mushrooms at all, but merely wipes them lovingly with a damp cloth.

In the winter of 1991, hikers in the Italian Alps found a body. It turned out not to be a crime scene, but the well preserved remains of a man who died more than five thousand years ago.

He became known as Utzi, the Iceman, and we have learned a great deal about this man, including what he ate, where he lived, and what he wore.

He was well equipped with a knapsack, flint axe, arrows and a string of dried Birch Polypores (Piptoporus betulinus) and another yet unidentified mushroom. The mushrooms would have been very handy trekking across the Alps, and not just for a snack on the southern slopes.either!

The polypores can be used as tinder for starting fires and as medicine for treating wounds. It can be boiled into a rich tea with immuno-enhancing properties. You can chew on a dried one as you walk.

Uzi the Iceman was well equipped for traversing the wilderness, aided by the noble polypores.

A necessary part of the ecosystem

The polypores are among the most common, widespread, and easily identifiable groups of wild mushrooms.

Almost all polypores grow on wood, such as trees, fallen logs, stumps, or semi-buried wood. Apart from being attractive and interesting mushrooms, common polypores are wood rotters, assisting in the decomposition of dead wood.

So they're important in natural ecosystems, recycling the nutrients and minerals in the wood and releasing them over a long period of time--- sometimes several hundred years from a single large tree--- and making the nutrients available for other forest organisms.

Taxonomically, the polypores are complicated, and we don't completely understand them.

It is easy to despise gold and silver, but exceedingly difficult to refuse a plate of mushrooms.

Mushroom pushing through the macadam in Paris

100 Edible Mushrooms
Michael Kuo loves mushrooms too. In this guide he identifies 100 species of mushroom, using full colour illustrations and some tips on where and when to find them. He also includes how to cook them in creative and delicious ways.
Buy Now

A Feast of Mushrooms - An Old Favourite 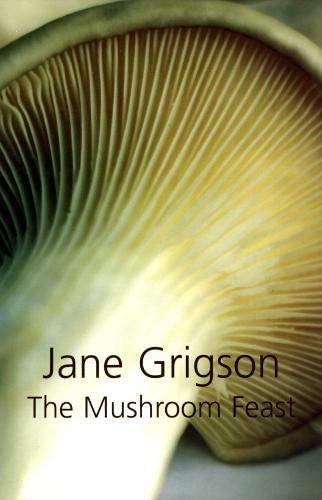 The Mushroom Feast: A Celebration of all Edible Fungi, Cultivated, Wild and Dried, with Recipes
Besides the traditional use of mushrooms to enhance meat and vegetable dishes, these delightful edible fungi are made into pate, powdered, pureed into mushroom ketchup, baked into a flan (an Alice B. Toklas specialty), baked as a cake and used in many other dishes - from the simple to the highly sophisticated - for soups, sauces, stuffings, main courses, and all too intriguing to resist.
Buy Now

Do you love mushrooms too?

Fanmail and Feedback for Fungus - You can be fresh, or dry.....