Breakup Chicken Recipe May Be the Antidote to Engagement Chicken

A few years back Engagement Chicken became an Internet sensation. Supposedly, the dish was so delicious that the person you served it to would ask you to marry him or her. Well, this chicken isn't that good. Actually, no chicken is that good. Anyway, if you were unwise enough ask someone to marry you after being served some lemony poultry thing with herbs or unwise enough to marry someone who just wanted you for your cooking skills there is a way out.

This tasty fowl should be able to counteract the effects of any poultry-based culinary spell intended to predispose its victims to propose. Early research suggests it may also provide a cure for victims of Matrimonial Mutton, Wedlock Wildebeest, and Betrothal Beef, but the author makes no claims as to its effectiveness against any non-bird, meat-based love potions.

Breakup Chicken isn't so awful he'll ask for a divorce or so good she'll want to marry it instead of you but it will give you something to serve after using it to work off some of your tension. And it will leave you with most of a bottle of your favorite white wine if that doesn't work for you.

It may well be the antidote for Engagement Chicken but I just serve it when we're craving a bit of rosemary chicken. It's actually even more delightful made with dark meat like boneless, skinless chicken thighs as it makes for a more tender chicken. The sauce is delightful in any case.

Eat up, break up, and enjoy!

Total Time: as long as it takes

There's No Reason To Go To Extremes - No Nitro, Please!

Was It Good Enough To Untie The Knot?

5 stars from 1 rating of Breakup Chicken

Do you find the idea of using chicken for behavioral modification in humans as strange as I do? Or do you believe in the magic of Engagement Chicken? I can readily understand teaching a dog a few tricks with bits of meat but it seems wildly inappropriate to attempt to get a mate to seal the bonds of matrimony with poultry. What do you think? 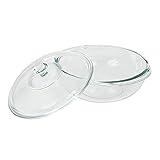 Pyrex 2-Quart Glass Bakeware Dish
Pyrex is lab-quality glassware in which you can bake behavior-modification poultry or just about anything else. Give your kitchen a bit of that 21st century steampunk (or something) feeling by mixing the wonders of modern culinary science with the superstitions of 20th century women's magazine readers.
Buy Now