I remember Dublin Coddle from my childhood. Coming in the door from school, I would be hit by the awesome smell of bacon and pork sausage and my stomach would rumble in anticipation.

When I bake a Dublin Coddle now, I can't keep the guests or the grandchildren out of the kitchen.

It's a simple dish to prepare, a slowly cooked casserole that looks after itself in the oven. Or make it in your crockpot, even easier.

Add Guinness for an extra touch of blarney and serve on St Patrick's Day.

Dublin Coddle is made with simple ingredients: pork sausages, bacon, onions, and potatoes.

The only seasonings are salt, pepper, and parsley. Water or a ham stock is added which also makes a simple, but delicious, gravy.

The Bacon for Dublin Coddle

Traditionally Irish bacon is made from the back meat of the pig, as opposed to the pork belly used in American bacon.

This makes it quite similar to Canadian bacon.

Both Irish bacon and Canadian bacon are cured and have about the same thickness in slices.

Both are cooked until done but not crisped like American bacon.

If you can't get Irish bacon, use bacon that's not sweetened.

Cast your vote for The Dublin Coddle Recipe

Le Creuset Stoneware 3-Quart Square Casserole with Lid, Fennel
I love the Le Creuset range of ovenware. This square casserole dish is stoneware with an enamel finish, dishwasher-safe and oven-safe up to 500 F
Buy Now

Do you make a special meal for St Patrick's Day? 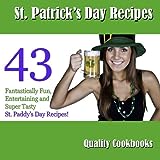