There were two versions of chocolate chip cookies in my house when I was a kid. There was my type and Grandma's type. Mine was given to me by one of my friends in the neighborhood. It has a lot of chocolate chips in it and they are very sweet. The other was my Grandma's recipe, which has less chips, and the dough isn't as sweet. My cookies were great if you wanted a sugar rush. Grandma's were a really nice treat with a cup of tea.

Everyone in the extended family had Grandma's recipe for her chocolate chip cookies, but somehow no one could make them taste quite as good as Grandma herself. So everyone always wanted some of the big batch of cookies she made every year at Christmas.

When my Grandma became weak due to her fight with cancer, she had my aunt help her to make her big batch of cookies that year. That was when my aunt found out why our cookies were never as good as Grandma's, but we didn't find out until about a couple of years later, after my Grandma passed away.

My aunt brought cookies to a funeral reception and we were all surprised at how much they tasted like Grandma's did. This is when she finally revealed the secret, it was all about the flour. When everyone was given the recipe it just said sifted flour. The secret is you need to use "Cake & Pastry" flour (she used Monarch).

Now we can make Grandma's delicious chocolate chip cookies for ourselves. However, I would gladly give that up, if it meant Grandma wouldn't have gotten sick, and she could still be here with us. Part of what made her cookies so special was that you had them with her, at her house. That we will never be able to duplicate. 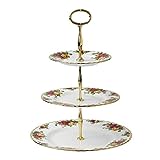 This is a lovely way to display your cookies or any other desserts that you make. My Grandmother would have loved it since it would have matched her china tea set.

This is a great book if you want to make a wide variety of cookies. It has more than 450 cookie recipes in it.

This is perfect for bringing the cookies for a family gathering or a pot luck at work.

Who Gave You Your Favorite Recipe?