The Bittersweet Taste of Ethiopian Coffee

Ethiopian Coffee is one of the finest coffee in the world. Grown wildly under the canopies of Ethiopia’s forest, the coffee beans tastes like wine and fruits. It is a pure Arabica, and its characteristics may still be in a primordial state, as it was “discovered” about 1200 years ago.

So, when you drink an ethiopian coffee, keep in mind few things:
- you will experience a rich, unique aroma
- your coffee comes from the place of origin
- you only pay less than $ 0.06 for an 8 oz cup to the farmers in Ethiopia
- you may not drink another one like it next year, or the year after it, or the year after....

For 2011, Ethiopia has surpassed Colombia, Indonesia and India in the amount of coffee exported. Its production has constantly increased over the last three years to 9.804.000 bags(over 1,491.million lb. or 676 million kg.), amount that placed Ethiopia in the 3rd place, after Brazil and Vietnam.

Coffee is Ethiopia’s most exported product. The second one is gold. But coffee is more than a statistic about the country's economy. Ethiopian coffee is the bread and butter for about 80% of population. Ethiopians are picking wild coffee berries or are cultivating their own small farm. For some, coffee is the only way they make money. You would think that, for such high valued commodity, they get a fair share. But the truth is that a farmer only makes about & 2,200 per year (that is, in the best case, about $1.70/lb of coffee). And people who have been there said that the money they make today is three times the money they made in 1999.

Ethiopian coffee has a long history, just like the history of the country.
It is said that the coffee, as a plant for human consumption, was first discovered in Ethiopia. There’s more than one account about where and how the coffee originated and you can find out more in Coffee as a social drink. But the circulated legend speaks about a goat herder who saw his animals acting funny after eating coffee berries. He picked some and brought them to a monastery where the monks made a drink out of them and declared them divine.

From there, the coffee spread through middle east during medieval times, finally arriving in Europe at the end of middle ages, with the travelers from the Orient. Some of these travelers snatched some coffee plants from their natural land and brought them to the newly discovered world, where they took off as coffee plantation all over South America.

But coffee kept growing wild, as usual, in Ethiopia. People loved it. They used it as a food, mixed with animal fat, as a medicine, and as a drink, developing a coffee ceremonial that is performed till today in some parts of the country.

In the meantime, Ethiopia strolled through the centuries without too much noise. Today, eighty percent of the country’s population is still depending on agriculture as a source of income and the biggest crop is coffee.
The finest of ethiopian coffee grows in a region called Harrar, situated east of Addis Ababa. This coffee it is also called Mocha Harrar. Another distinctive coffee comes from Yirgacheffe, a south-western region.

While consumers in the rich countries enjoy such wonderful ethiopian coffee, the coffee farmers that make sure you get the finest coffee beans live in poverty. They live in villages with no electricity, running water or any of modern world commodities. There is only one big barn as a school, with no toilets, and their houses, consisting in one or two rooms, have almost no windows.

They feed from whatever the land gives them, they often have one goat. The little money they make from their coffee crops barely covers the necessities.

So how is that possible that here in US, we may often pay $ 20 or more for a pound of ethiopian coffee but the farmers only get less the 10%? Because between the farmers and me, as a consumer, there is a big chain of middlemen that buy, sell, resell, process, export, transport, roast and package the precious beans, reaping all the benefits.

The farmers are responsible for cultivating the coffee trees, maintaining the plantation, picking the berries by hand, often drying them in the sun and then sort the beans, again, by hand, so that only the best ones reach my coffee table. It is hard work that takes long hours, a lot of attention and physical effort. It is also easy for me not to think of all these farmers and take their work for granted.

If I don’t think about the farmers that live in poverty, others do. The best example is the Oromia Coffee Farmers Cooperative Union (OCFCU), which is a success story. Founded in 1999, in the region of Oromia, Ethiopia, the Union gathered small coffee farmers cooperatives and facilitate a direct link between the farmers and the roasters, eliminating the middlemen and the auction. By doing this, everybody wins: farmers get more money for their coffee and roasters are paying less for imported ethiopian beans. The Union grows their membership with every year.

The central figure of the Coffee Union is Tadesse Meskela who started this movement. He is well known among the people in the coffee industry from his business trips in Europe and United States. With a bag of coffee samples and a big determination, Tadesse Meskela manage to promote ethiopian coffee and sell it straight to the biggest coffee roasters around the world. His clients are in US, Italy, England and other big countries.

Black Gold is a documentary about Tadesse Meskela and the Coffee Union. It was produced few years back and distributed all over the world. The movie shows the struggle for survival in the very region of Ethiopia where Starbucks buys its best coffee for close to nothing. The movie has its own site called blackgoldmovie.com.

With the money it makes, the Union pays back to the cooperatives and the farmers. Most of the profit gets invested in a better life of the very coffee farmers. Since its existence, the Union has built
11 primary schools
3 high schools
1 kindergarten
1 library
8 health posts
3 dry latrines
76 water springs
8 bridges
3 roads
6 coffee processing plants

There are almost 200.000 farmers enrolled in Coffee Union. But 15 million ethiopians depend on coffee, according to World Intellectual Property Organization, that mentions a war between the trademarks of Ethiopia’s finest beans. So, there are still lots of people struggling to survive with under $ 1 per lb of coffee. 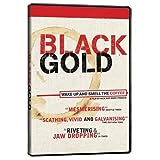 In the United States, ethiopian coffee is sold mostly by gourmet coffee roasters. Places like Sweet Marias will tell you what kind of coffee they have, in which region was produced, if it was dry processed (the coffee berries are let to dry on the tree) or wet processed (washed then dried using the latest drying technologies), what kind of characteristics they have, the roast type and other specific information.

Also, Coffee Reviews, a independent company that grades coffee and does the cupping, tells you which coffees they have reviewed lately, country and region of origin, and ratings for aroma, acidity, body, flavour and aftertaste. This reviews also tells offers the website of the roasters that sells the coffee so you can go there and buy it.

For the first part of this year (2012), the best rated ethiopian coffee is called Ethiopia Yirgacheffe Gedeo Worka and was roasted by Johnson Brothers from Madison, Wisconsin. The sample received a score of 94 out of 100. They say the coffee is “intense, sweetly bright, crisp yet lush”. It cost $15.99/12 oz.

If you didn’t have a cup of ethiopian coffee, do yourself a favor and have one. And while you drink it, watch the video below and think of the hills where it grew and the the hands that picked the fruit, then think about how much of the amount you paid for your coffee was given to that hand. And enjoy, because just as wine, coffee may not taste the same next year.