This latest production in the ongoing international burger recipe series sees a classic burger adapted and developed to give it an English slant and theme. The burger itself is made from English pork and apple and incorporated in a plain white bap (soft bread roll). It is topped with the King of English cheeses, Stilton, and is served accompanied by real British chips and garden peas. The recipe is fairly straightforward and easy to prepare, not greatly unlike a traditional burger and fries. Why not give it a go and introduce new flavours and textures to your burger repertoire today?

The method used on this page to prepare the chips is considerably more time consuming than conventional techniques but if you do have the time to follow these instructions, you will hopefully agree that the results more than justify the means. Alternatively, you can of course follow your normal method of preparing chips instead.

How to Make Homemade Chips

Chips prepared by this method will require to be started long before the burger. Allow one moderately large baking potato per person. Peel the potato(es), slice and chop in to chip shapes. Add the potato pieces to a pot, followed by enough cold water to ensure they are comfortably covered. Bring the water to a boil and reduce the heat to achieve a gentle simmer for five minutes only.

Drain the chips through a colander and return to the pot with more cold water, for a further five minutes only. This helps to cool them quickly. Drain again before transferring them to a plastic dish with a lid. Refrigerate for a minimum of half an hour.

When the chips are removed from the refrigerator, they will not only be cooled, they will still be wet. It is important to dry them off before giving them what will be their first deep fry submersion. This is done by laying them on one half of a clean tea towel, folding the other half over the top and very gently patting them dry. Leave them covered while you heat your deep fryer to 300F/150C, then fry them for five minutes.

Remove the chips from the deep fryer and lay them in a single layer on top of kitchen paper on a plate. They should still be soft in texture and pale in colour. Cover them with a vented plastic food cover and allow them to cool completely. This should take twenty to thirty minutes. Dry the plastic dish which you used earlier, return the chips to it and again refrigerate them for a minimum of a further half hour.

The chips are of course going to be deep fried for a second time but this will be done immediately prior to service and it is to the burger that your attention should now be turned.

There are a number of English counties which are famed for the quality of their pork production. If you are preparing this in England, therefore - or indeed anywhere in the UK - you should have no difficulty in obtaining quality minced pork. If you do not have access to English pork, do go for the best quality you can afford but ensure it is not too lean, or your burger will be dry and less palatable than it should be.

Put the pork in to a mixing bowl. Core the apple, peel it and finely dice before adding it to the pork. Season with the dried sage, salt and white pepper.

Use your hand to mix the ingredients, gently squeezing the apple through the pork. Roll in to a ball and flatten between your palms to a burger shape, perhaps slightly less than an inch thick.

Heat up some vegetable oil in a non-stick frying pan and fry the burger on a low to medium heat for ten to twelve minutes each side until done. The burger should be turned only once and remember never to press down on the burger as it is cooking. This only causes the juices to escape to the pan and renders your burger both dry and bland.

When the burger is done, turn off the heat and push the pan to a cooler part of the stove to let the burger rest while you finish preparing your chips and other accompaniments. 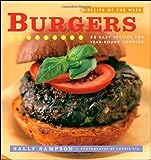 Recipe of the Week: Burgers: 52 Easy Recipes for Year-round Cooking
However much you love burgers, the same recipe prepared time and again can become a bit repetitive. This fabulous book takes burger making to a new level and includes one recipe for every week of the year, to be prepared indoors on the stove, or outdoors on the grill.
Buy Now

The chips should be removed from the refrigerator and deep fried for a second time, at 350F/170C, for five to seven minutes, depending upon preference. They should come out crisp and golden and be drained again on kitchen paper prior to being served.

When the chips are in the fryer, add two tablespoons of frozen peas to a pot of boiling water for three minutes. Drain through a colander.

The bap should be halved horizontally and lightly toasted under an overhead grill.

Lay the toasted bap halves, open sides up, on your serving plate and the chips alongside. Place the rested pork and apple burger on the bottom half of the bap. Crumble an ounce of stilton by hand and lay on top of the burger before putting the top in place. Drain the peas through a colander and add to the plate last of all. Your English themed burger is now ready for immediate service.

English Cider is the Perfect Accompaniment to an English Themed Burger

While other burgers in this series have been served with an appropriate, recommended beer to represent the country, this English themed burger, containing apples as it does, is perhaps better accompanied by a glass of ice cold, English cider. A quality English ale would of course be a more than adequate alternative.

Does this English Themed Burger Appeal to your Tastebuds?

I hope that you find this burger recipe appealing enough that you will give it a try for yourself, at the very least by way of having a break from the norm. I would like to thank you for taking the time to read through this page and any feedback or comments which you do have may be left immediately below.

Cast your vote for this English themed burger recipe!