Waffles are one of the more flexible foods to work with

Waffles are one of the most flexible foods to work with, and once you understand and know how to make them from a basic recipe, the sky's the limits as far as the creative culinary delights you can make from this simple food.

Of course you have what are considered certain types of waffles, such as the American waffle, Belgian waffle, stroopwafels, Scandinavian waffles, among others.

All that is for those trying to impress, although there is a strengh in each one, and a definite difference. In the end, as far as making waffles at home, the fun and key is keeping it simple and learning a basic waffle recipe, and from there adding whatever you want to make is special and suited to you or your family's tastes.

Some of the differences between waffles include the density of them, whether the waffle has a filling, thinness, thickness, chewy, crisp, and the batter used to make them.

Most start from a basic batter, but add a number of ingredients to make it unique in its own right. Other major differences is just in what is put on top of the waffle, which in practice is just about anything someone likes.

Don't be fooled by chefs and others that tout the variety of waffles. In the end, it's what you and your family like, and no matter what it may be called, that's what really matters.

It's just not that complicated to make a good waffle and add whatever you want to it to personalize it for you and your loved ones. That's the beauty and strength of waffles, the amazing ability to personalize them for those who are going to eat them.

So all you have to do is learn a foundational waffle recipe, and you're set to create whatever unique waffle you and your family prefer.

The point I'm making is don't worry about that professional waffel thing. If you do, you'll get discouraged and believe you can't make a good and tasty waffle.

Just have fun, enjoy making and eating them, because that's why we do it in the first place. 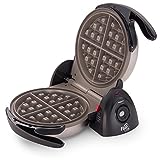 Before you do anything with a waffle, check to make sure you have the ingredients, as there's nothing worse than having that waffle craving and you're all psyched up about it, have everything out, and find out you're missing a needed ingredient.

What are the basic ingredients for making a waffle?

For the most part most waffle ingredients are part of anybody's kitchen, and so if you keep it stocked, you're probably good to go.

The ingredients to make waffles are milk, eggs, butter, sugar, baking powder, oil, yeast and all-purpose flour. See I told you, for the most part they're ingredients all of us usually have in our kitchen supply.

So if you've checked those off and have enough supply to go forward, let's get into the simple way to make a waffle.

Want to take a bite out of this waffle stack?

Do you have a waffle maker?

This next step is obvious, but not all people know it: do you have a waffle maker?

While there is no need to have a waffle maker, it does add those unique indentations that catch the topping and make it a fun part of the waffle experience.

If you don't have a waffle maker, you would simply cook them like you would a pancake, which it pretty much essentially becomes.

What you need to make the waffle batter

I'm going to give you a basic waffle recipe here, that once learned, can be adopted to your personal or family tastes. Remember it depends on the size of the crowd you feed, so can adjust the amount of the ingredientes accordingly.

Here's what you'll need to make this basic waffle recipe: (I'm assuming you have at least several people to feed and they're hungry;-)

Belgian Waffle as a desert!

Steps to take to make waffle

A. Take your eggs and separate the yolk from the egg whites and beat them until you get that snowy look

B. Next, pour you milk into the egg yolks and add your melted butter and sugar. Mix this together until the sugar dissolves into the mixture.

D. Don't over mix and make it too even. It's good to leave some (but not many) lumps to instruct you it's at the right consistency.

E. At this time take the egg whites you separated and slowly mix it into the batter.

F. That's it. Now you're ready to bake your waffles. Assuming you're using a waffle iron that has been preheated, pour about a cup of your batter in and close it and let it cook. Usually it will be done in about two minutes.

Because all waffle irons can be different though, check your instructions to make sure that's the time allotted to finish your waffles.

Now add your toppings and eat and enjoy.

Variety of toppings on Belgian waffle 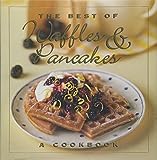 Once you get this basic waffle recipe down, you can then branch out and try all sorts of things.

There are a couple of ways to do this.

First, it's as simple as taking whatever type of condiment or food you want and sprinkling or dabbing it on top; anything from cinnamon to whipped cream.

The other way, which you have to be a little more careful with is to add ingredients to the batter itself. Here you have to know everyone likes what is being added, and what the consistency is that will give you the flavor you like.

It's best to make up a smaller batch of waffle batter and experiment. Write down how much you added of the extra ingredient to the batter and adjust it depending on the amount of batter you'll end up making.

Waffles are great way to teach children to enjoy cooking

This is a great way to teach your children to learn cooking and how enjoyable and fun it can be.

Just have all those little goodies each one likes ready and available so they can personalize and make the waffle they really want.

Wow! All this is making me hungry. I think I'll stop pecking on this keyboard and get out a few things to brew up some batter and enjoy the fruit of the waffles I'm writing about.