Choose the Right Tablet Stand for Your Kitchen iPad

Keeping your kitchen iPad safe but conveniently close while you're cooking

Do you use an iPad or another tablet in your kitchen? As a collector of dead-tree cookbooks, it took me a long time to admit that technology - as in a mobile device, like an iPad - has a place in food prep. But the kitchen iPad full of recipes and with access to all your cooking shows and how-to videos?

Yeah, it turns out to be a real blessing. Especially these days when we're all looking for ways to save space, get organized in the kitchen, and be more efficient to save time.

But where do you put your iPad or tablet, when you're cooking?

You need it close at hand so you can find and follow a recipe - or catch up on Oprah while you toss the salad - but you sure don't want your tablet to get splashed with vinaigrette or knocked off the countertop in the mad flurry of dinner preparation! So, I've been considering the merits of various stands and mounts to prop that tablet up at a readable angle and hopefully keep it safely out of the way.

Read on to see what I've come up with - and let's exchange notes on the best food apps for iPad, while we're at it. Love to hear your thoughts on the best kitchen tablet stands!

I'm normally quite a big fan of Belkin products, and some of their well-designed tablet stands models even come with a stylus (sometimes they call it a wand) that lets you keep your food-smeared hands off the iPad when you need to touch-operate) is just plain good thinking.

Belkin Chef Stand for Tablets
For a modern kitchen with stainless steel appliances, the Belkin Chef tablet stand is a beautiful and practical match - as long as you've got the counter space to accommodate this sleek new take on the traditional cookbook stand. Stylus sold separately.
Buy Now

iPad Fridge Mount - Clever Design! It's by Belkin, of course

IF my refrigerator door wasn't completely covered with cute souvenir magnets, family photographs, and kids' artwork (which it so hopelessly is, all the time) I do believe the sleek Belkin fridge mount would be my first choice of iPad wrangling device. It looks so classy, like those high-end fridges with a TV in the door, only better because it's a tablet... but I don't know what on earth I'd do with all those crayon'd dinosaurs. 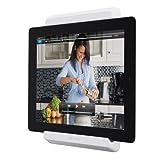 Belkin Fridge Mount for iPad 2, 3rd Generation, and 4th Generation with Retina Display
This mount uses 3M Command Strips to stick to your fridge, so no tools are needed to install it. The iPad just slips in, and there is a clear plexi faceplate that swings up over the screen to keep it free of splatters in case of a blender explosion (could happen!) or a food fight.
Buy Now

If you have another kind of tablet that you use in the kitchen and/or your recipes are stashed on your smartphone, it makes sense to choose a mount or stand that can fit a variety of devices from Kindle to iPad to even your phone, if that's where your recipe apps are stashed. Even better if you can also use it to hold a recipe card or cookbook up out of the splattering batter, where it stays safe and clean but you can easily see it. How about reading a good novel while you're peeling the potatoes? Can do!

It doesn't take up any counter space. It cleans easily. It can be easily taken down and put away if you're not using it, then put back up again quick-as-a-wink when you need it. It goes with every style of decor. It looks good enough to use in any room of your house, not just the kitchen.... yep, there's a lot going for this simply acrylic iPad stand.

I like it that you can get an extra mounting piece for the acrylic Kitchen iPad Stand - that's the piece that fastens up under your cabinet, that the stand itself slides into. With a couple of mounts you can put one on each side of the kitchen at different work stations, then use the one stand in both locations, depending on what kitchen task you're doing. 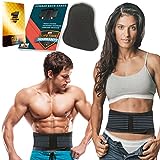 Jafuam-0312-vp-1078
Because this mounting strip gets tucked up behind the face frame of most standard kitchen cabinet types, it's the next thing to invisible when not in use - but right there when you need it, to use your iPad holder in another location.
Buy Now

Which Foodie Apps are on Your iPad? - Here are some goodies to try, all available on iTunes

Now, the whole point of buying a kitchen iPad stand is to keep food from getting on the tablet, but we do want lots of luscious food apps to give instruction and inspiration in the kitchen. If you're just starting to explore the recipes available through the miracle of the internet, here are some popular apps you'll find at a reasonable price (or free, in some cases) on iTunes.

Alphabetical order, not necessarily in order of preference:

My Recipe Book for iPad - Why not start with your own recipes!

"Your recipes, finally organized." Think of My Recipe Book app (for iPhone, iPad, and iPod touch) as a wonderfully useable and well organized version of that old recipe box your mother used to have. You can read more about My Recipe Book at www.myrecipebookapp.com, to get an idea of what a good app (and of course your kitchen tablet) can do to help you get organized and cook up a storm!

Do you cook with an iPad in the kitchen?