Recipes for Making Paninis from Leftovers

Have plans yet for your leftover turkey? Here are some delicious panini recipe ideas to use up those leftovers from Thanksgiving, Christmas, Easter and St. Patrick's Day, - just about any holiday feast.  Turkey and  ham are traditional panini stuffers.  Add gravy, cranberry sauce, cheeseballs and stuffing, and you have the perfect ingredients for a scrumptuous post-holiday panini feast.  Lamb, corned beef and hard boiled eggs make fabulous paninis too! How about a dessert panini from chocolate bunnies and marshmallow chicks?

You can make these recipes fast and easy without a lot of extra prep of ingredients. The variations are bound only by your imagination.  Create your own variations of the recipes below by adding one or two of your own family's favorite holiday leftovers.

Image courtesy of Vegan Feast Catering hosted on Flickr.com under CC BY 2.0.

This recipe will rival your Thanksgiving feast

Preheat panini press, medium heat. Spread a thin layer of gravy on each piece of ciabatta. Layer one piece with turkey and cranberry sauce. Sprinkle with sage or poultry herb seasoning and salt and pepper to taste. Put sandwich together and butter outside. (Easiest to butter one side, place buttered side on the press, then butter the side.) Cook until browned.

Other tasty leftover additions include dressing or stuffing, spinach or lettuce leaves, cheese, and apple pie filling. Yes, you can use up leftover dessert too!

Great with turkey cooked on a grill

Preheat panini press. Layer one pieces of bread with cheddar cheese slice or spread, romaine or spinach leaves, turkey, salt and pepper to taste, then apple pie filling or slices. Finish with another slice of cheese or spreadmore cheeseball on the remaining slice. Butter one side of sandwich and place on panini press. Butter the other side. Cook until golden brown and cheese has melted.

The smokiness of leftover turkey that was cooked on the grill adds terrific flavor. Try pear slices instead of apple, or brie instead of cheddar cheese. Also good to make with leftover croissants.

Calphalon Contemporary Nonstick Panini Pan and Press
Designed for use on the stovetop, this panini pan features a non-stick surface. You can move it from stovetop to oven, and it's great for grilling meats and veggies indoor too.
Buy Now 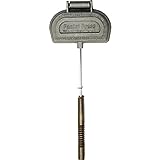 Ham and Cheese on English Muffin

Preheat the panini press. Spread green bean casserole on the bottom of the muffin, add ham, season with salt and pepper to taste, top with cheese or cheeseball spread.

A sweet and spicy mustard sauce provides a different twist on this panini. Try leftover broccoli or brussel sprouts instead of green bean casserole. Also good with croissant instead of English muffin

Italian or other plain bread

Preheat panini press or pan. Spread a thin layer of mustard sauce on each piece of bread. Add mashed sweet potatoes, sprinkle with cinnamon, top with ham and another layer of sweet potatoes. Butter top of sandwich, place in press buttered side down, then butter the other side. Cook until golden brown.

Another tasty addition would be grilled pineapple - grill it on the press before you make your sandwich. Or use thinly sliced grilled pears or applies.

Garlic gives this one its twist

Cheese of any variety - don't forget to use up the cheeseball!

Preheat panini press. On one slice of bread, spread the mustard. Layer on the cheese and ham. Top with the roasted red peppers or appetizer spread. Finish with top slice of bread. Brush olive oil on top, place on panini press oiled side down, and brush oil on other side of sandwich. Cook until golden brown.

Remove from press and while the sandwich is still hot, rub garlic on one or both sides. Super yummy! If you can't handle the raw garlic taste, put the clove in the press next to the sandwich. Keep an eye on it and take it out before it turns brown. The cooked garlic has a mellower taste.

The key ingredients for this tasty dessert include those leftover marshmallow chicks and half-eaten chocolate bunnies. Here's my take on this campfire favorite.

Preheat panini press. On one slice of bread, place the marshmallows and chocolate pieces. Top with the other piece of bread and butter or spray outside of sandwich. Place on panini press and cook until melted, about 1 minute each side.

My favorite additions include peanut butter and slices of banana. I like to combine milk chocolate and dark chocolate if I have it. Graham crackers or plain bread work as well as cinnamon swirl. Hollow chocolate bunnies or eggs are best for this. If you have solid chocolate, use a potator peeler to shave thin slices so it will spread and melt easily.

Preheat panini press. On one slice of muffin, spread the mayo. Layer on the cheese and egg slices. Top with the roasted asparagus. Finish with top slice of muffin. Brush olive oil on top, place on panini press oiled side down, and brush oil on other side of sandwich. Cook until golden brown.

Eggs-ellent. Try leftover hollandaise sauce instead of mayo. Use a fried egg instead of hardboiled. Add ham or bacon slices.

To roast asparagus, place trimmed spears in a single layer on a baking sheet, season with salt, pepper and a little bit of olive oil. Roast in preheated 400 degree oven for 10 minutes.

Lamb and mint sauce with a twist

Slices of rare to medium-rare lamb

Edam or other mild cheese

Preheat panini press. Prepare mint-mustard sauce by combining tablespoon of mint sauce with tablespoon dijon mustard. On one slice of ciabatta bread, spread the mint-mustard sauce. Layer on the lamb and cucumbers. Top with the Edam cheese. Finish with top slice of ciabatta bread. Brush olive oil on top, place on panini press oiled side down, and brush oil on other side of sandwich. Cook until golden brown.

Preheat panini press. On one slice of bread, spread the thousand island dressing. Layer on the cheese and corned beef. Top with the roasted cabbage. Finish with top slice of bread. Brush olive oil on top, place on panini press oiled side down, and brush oil on other side of sandwich. Cook until golden brown.