A healthy, quick and easy recipe for pear and blue cheese pizza

We love pizza and I think that many people would say the same. But we do like to eat health foods (well, within our own definition of the word!) and this is a quick and easy recipe that I'm often asked to make.

It uses only a little cheese but I use a blue-veined variety and its flavour goes a long way. A little goat cheese is also used.

The pizza also features delicious pear, lightly cooked leeks and is topped with salad leaves. I like to experiment with fruit in recipes and this became a firm favorite that I make often - luckily it's very simple to prepare.

When I was young and newly-married, I was quite happy to make pizza from absolute scratch - making and kneading the dough and letting it rise. I have less patience and time these days but the ready-made dough I use is very tasty and just as good as anything I can make myself.

I've made this for guests and for parties and served it both hot and cold. If we're going to eat this cold - and it's delicious as a snack as well as dinner - then I let it cool down before I add the salad leaves. This way, they leaves are crisp and fresh. Something that's particularly delicious about this recipe is that half the pear is cooked and the other half is added raw therefore adding crunch and a wonderful flavor combination.

All you need are a few simple ingredients

This makes a pizza that is about 10 inches square. We can easily demolish that but if you're serving this with side dishes, it could serve four - but there'd be no second helpings!

This dish bakes quite quickly but you will need to have the oven up to temperature. So the first thing to do is turn on the oven and set to 400°. Put a frying pan or skillet onto the stove and heat a little olive oil. Leeks are not terribly absorbent so you don't need much.

Are the leeks you buy always really dirty? Mine are and I guess that's a good thing in a way but once I've sliced the leeks, I put them into a sieve and wash them very thoroughly under cold running water. To make sure that there's no grit trapped between the layers, I separate them into rings with my fingers when they are being cleaned under the tap. To avoid any splatters when they are added to the oil, I then drain them on paper towel.

ADD TO THE OIL

Add the leeks to the pan and stir to make sure that they are coated with oil. Turn the stove down to a medium heat. They need to cook for about five minutes.

Halve the pear and remove any seeds or hard areas of the core. Slice on half into slices and cut the other half into cubes. Add the cubes to the leeks in the pan and cook for a further two minutes then turn the heat down to super-low. Reserve the pear slices for later.

GET THE DOUGH READY TO BAKE

Remove the dough from the tube and form into a rough square of about ten inches on a cookie sheet or in a baking dish that has been very lightly oiled. Often when I'm making meals with pastry or dough, I flour the cookie sheet rather than use oil but for this baked dish, the oil gives the bottom of the pizza a little extra crunch.

Once you've flattened the dough out, place it in the oven for about 5 to 8 minutes. It should be just browned rather than completely cooked, because it's going to be put back into the oven once it's topped.

While the base is baking, grate the harder of the three cheeses, the Swiss. Note that you can experiment with different cheeses here. I like the milder flavor of the Swiss because it doesn't conflict with the blue cheese, the way that a stronger cheese would. When you've removed the base from the oven, sprinkle the grated cheese over the top.

Spoon the leek and pear mixture onto the pizza base.

Top with the cheese

I don't slice the remaining cheeses in advance, just hold the chunk in my hand above the base and break pieces off with a teaspoon.

RETURN TO THE OVEN

Place the pizza back into the oven. It will need to bake for another 5 to 8 minutes. You'll know when it's ready because the crust will be golden and the cheese will have melted - and it will smell wonderful!

As soon as you remove the pizza from the oven, top with the raw pear slices. The heat rising from the pizza will warm the pear, but the slices will retain a good crunch. Place the pizza aside for a moment while you get the plates and silverware ready, then add the salad leaves and serve at once.

If you make pizza regularly, or plan to, you'll find that these stones will give you some great results. 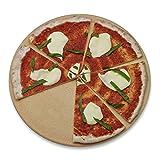 Pizza is a wonderful choice for people who don't eat meat. If you're entertaining non-meat eaters,it's the simplest way to go.

But why stick to the usual toppings? The book below will give you some incredible ideas.

Vegan Pizza: 50 Cheesy, Crispy, Healthy Recipes
If you love pizza but don't eat meat, this is the book for you. Even people who don't ordinarily like pizza (and takeout versions can be very greasy and heavy) have been converted thanks to this book. Healthy, tasty and guilt-free. Perfect.
Buy Now