Why You Should Cook With a Pressure Cooker

I've been writing for 13+ years and like to share useful information from projects I've done, experiences I've had, and things I've learned.

Cooking with a Pressure Cooker

I received my first pressure cooker in my early 20's.  It was a handy-me-down from my aunt that had already seen many years of service. It was a 4 quart Mirro-Matic that made quite a clamor when cooking. I was single at the time and I seldom used it, but once I got married I discovered some of it's finer points as I began cooking regularly.

The Advantages: Or, Why I Love My Pressure Cooker

Pressure cookers offer a number of advantages over other methods of cooking.

There are many manufacturers that offer pressure cookers. T-Fal, Oster, Deni, and Sunbeam for instance are in the market. However Presto, Mirro, Cusinart, and Nesco are better known for these products. All American makes well known electric models but Wolfgang Puck also has his name on some. Kuhn Rikon, Magefesa, and Fagor are newer names in the American market and are well respected.

In the end, you need to find the features you want and the ones that match up to your budget as there are a wide range of options.

There are a number of things to consider when choosing your pressure cooker.

A Few Tips On Using a Pressure Cooker

The manual you receive when purchasing a pressure cooker will cover all the details on how to use it.

How to Use a Pressure Cooker: The Basics

If you're using a recipe, knowing how long to cook something is simple; it's stated in the recipe. However, if you're cooking an item without a recipe, then having a table to give you approximate cooking times is wise as overcooking can result in mushy food! Here are some handy online references.

Taking Care of Your Pressure Cooker

After purchasing your pressure cooker, be sure to read the manual thoroughly and follow the care/cleaning instructions provided there.

Using a Pressure Cooker for Canning 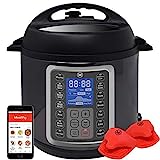 Mealthy MultiPot 9-in-1 Programmable Pressure Cooker 6 Quarts with Stainless Steel Pot, Steamer Basket, instant access to recipe app. Pressure cook, slow cook, sauté, rice cooker, yogurt, steam
Multi-pots have become very popular. They are the modern pressure cooker. I upgraded a a year or two ago and love the ease of mine. It has numerous preset cooking modes that allow me to cook without having to look up specific cooking times when I am operating without a recipe. I've also enjoyed the delayed start when I'm rushing around with at least 10 more things to do rather than loiter in the kitchen. It seems perfect for beginners too because you don't have to guess when the cooker is up to the necessary pressure level, it tells you. It comes with accessories and recipes as well.
Buy Now