Bringing Good Food to Your Family

If there is a way to put chocolate in anything, I'm all for it.

I actually tried this recipe after tiring of all the old banana bread recipes I had baked over the years. I found that they just weren't cutting it for me any more.

So I went on a quest. I began asking everyone I knew for their recipes. There were some good ones, but none of them stood out from the rest. Then I met Karen!

Copyrighted Material by Favored1. Do not copy. Photo credit byFavored1 or Amazon unless otherwise noted. This artwork is licensed under the Creative Commons Attribution-ShareAlike 3.0 License.

There are several good brands out there, but it really depends on what you like to use the most. You also need to consider what works best in your type of oven. Here are a the kinds of baking pans I use. I actually use several sizes depending on how big a batch I'm making at the time, which is usually more than one.

If you could save time, wouldn't you?

Norpro Nonstick Mini Loaf Pan, 8 Count, One Size, As Shown
One of the best things in a kitchen is a pan that helps save time. I usually make several mini loaves of banana bread and freeze them for company or to give as gifts to people that pop in for a visit.
Buy Now

I like this pan because it has so many uses and cleans up easily. 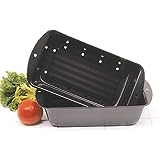 Norpro Nonstick Meat Loaf/Bread Pan Set
I have a pan like this because it works well for baked goods and meat.
Buy Now

Bringing Good Food to Your Family

My husband was making some bank transactions when I approached the counter and stood next to him. I'm not the type to just watch and say nothing, so I just started chatting to the woman helping my husband. At that time Karen was a branch manager at our local bank. Honestly, I have no idea what we were talking about at first, but remembered hearing that her father was a baker."Is your Dad still in the baking business?" I asked her. That's how it began. "I'm looking for a really good banana bread recipe, do you think he would give me one?" I boldly continued.

She politely answered my very forward question, "I don't know, but I have one."

What a transaction I made that day. The lovely lady kept her word, and the next time we were in the bank, she had the recipe for me. Thank you Karen!

Let me tell you, since I received this recipe, I stopped asking for any more. Would you like to try it? It has been tweaked a little by me, but I guess I can share my "secrets" as long as you don't tell anyone else :)

Do you enjoy baking?

Be sure to set out the eggs and butter for several hours so they reach room temperature.

This is the recipe that I serve to my family and friends.

I make several small loaves and freeze them as gifts.

Now I have plenty on hand of the plain banana bread or the chocolate chip, walnut and raisin bread. If you want more of a fruit nutty bread try adding dried crasins, cranberries or dates.

Share your fresh baked bread with a friend over coffee or tea. It's great straight

out of the oven!

Do you usually make banana bread without nuts?

Was it really prize winning? Yes.

My family thinks it's a winning recipe, but this chocolate chip banana nut bread did win a ribbon at the county fair.It has gotten great reviews. But you'll never know if you don't make it for yourself.

Go ahead and make some banana bread for yourself, then let me know how you liked it. Maybe there's another ribbon waiting for you.

Are you going to try making this banana bread with a twist of chocolate?

Sometimes instead of making a loaf cake, I make muffins from the same recipe.

I saw this video and felt it might be useful so I wanted to include it in this site.

Cookbooks by Today's Best Chef's - For the Baker in You

I tried JoshK's Strawberry Banana Bread recipe in 2012 and it was great.

How great was it? With a little tweaking like adding fresh berries and less bananas, it too earned a blue ribbon.

Check out this week's challenge on my: Daily Favor Blog