Looking for an healthy alternative to your daily cup of coffee, but don't feel like measuring, boiling and preparing a cup of  tea from scratch? Try these African Rooibos tea K-cups!

Rooibos tea has many health benefits and has spread across the world as a drink of choice for many who want a low caffeine drink they can still flavor with milk and sugar, or drink on its own as a health tea.

Rooibos tea has high levels of antioxidants including aspalathin and nothofagin, and its lack of caffeine makes it the tea of choice for many health-concerned customers in the Western World. It has low tannin levels next to black tea and is purported to help with allergies, nervous tension and digestive problems.

In South Africa they have used it traditionally for dermatological problems, asthma, allergies and in relieving infantile colic. It is not reported to have any adverse effects. It may even be helpful in the treatment of acne because of high levels of alpha hydroxy acid and zinc in the herb.

Some producers claim that Rooibos tea is good for cancer prevention, reducing headaches, insomnia and irritability, and increasing immune function whilst helping to give strong bones and teeth.

The tea is made from the leaves of the red bush plant, Aspalathus Linearis, which grows only in the Cederberg region of South Africa. In the South African region it is traditionally served with sugar and milk but outside of Africa it has come to be drunk on its own or with a little bit of honey. 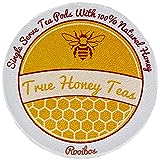 Short history of the Rooibos tea

Rooibos was originally harvested by the Khoisan tribe, who harvested the herb for medicinal purposes and for its great taste. When the Khoisan tribe dwindled, a botanist called Carl Humberg rediscovered the herb in 1772. He revived an interest in the tea and it was later marketed as “Mountain Tea” by Benjamin Ginsberg as an alternative to brown tea.

During World War Two, it was very difficult to export tea from Asia and as such Rooibos imported from Africa became a new favourite. However, due to the plant’s scarcity (it coming from a relatively small region uniquely) the price of the leaves was high and it was difficult to get hold of. In the late 1960′s a South African mother, Annique Theron published a book about the benefits of the tea which caused a craze for the tea and its medicinal properties. In the last few years, demand for Rooibos tea has gone up by fifty percent. Most noticably drunk in Africa, Asia and Europe, it is finding its way into drinkers in the Americas as well.