Why I Changed my Cooking Oil to Safflower

In honor of the letter "S," I am sharing my journey to finding a better oil with all who are interested. My Safflower Solution will walk you through my journey of discovery that began with one simple Google search: What is a canola? I mean, I really thought a "canola" was a thing, and I wanted to see what it looked like before they squeezed the oil out of it.

Because my focus on this page is of the safflower oil, I will begin this lens with a picture of a safflower. It's a prickly-looking thing, isn't it? I say "thanks" to William Moore Farms for this Creative Commons image of the plant.

Read on to find out how my search for canola lead me to the use of this wonderful oil called safflower oil.

What Is a Canola?

And is it really that good for you?

Okay, first I need to give the disclaimer that I can only speak from experience and personal research. There is a lot of controversy on this topic, and I am not a professional. But, to me, personal experience speaks more loudly than volumes of tweaked and twisted statistics that almost always seem to favor the side of the party doing the studies.

So, what did I come up with when I did my search for Canola? Well, it wasn't the beautiful picture I've included (with thanks to Flickr user Neil Bird), but it could have been simply because that picture, of a rape seed field, is the source of canola oil. Canola is actually an acronym for "CANadian Oil Low Acid," though farmers in the U.S. who are wanting to cash in on the (not-so healthy oil--as I will discuss later) are now saying they are planting fields of Canola rather than using the negative-sounding term of "rape seed." Some products, however (like a famous brand of peanut butter), do list rape seed oil as an ingredient.

It was the information that rape seed was originally used as an industrial oil because it's high "Erucic" acid that first got my attention. I mean, I would guess that many oils could be used to manufacture latex and similar products, but I haven't heard that they then require hexane gas to convert them to states where they will be edible for humans. I know for sure that the good oils, like safflower and olive, are naturally pressed to retrieve the oils from the plants they are named after. (Just an interesting side note that most oils are named after their derivative plant like: corn oil comes from corn; soybean oil from soybeans; sunflower oil from sunflowers, safflower oil from safflower; peanut oil from peanuts, etc.)

So, they found a chemical way to reduce the erucic acid and make the oil tolerable for human consumption, but does that make it good for us? Well, have you ever noticed how vegetable oil (which is primarily Canola) gets rancid in the cupboard? I didn't used to read ingredients as much as I do now, and it was the rancid smell and taste that let me know my favorite Kashi snack bars used Canola instead of a better oil. I do not like the taste or smell of old, rancid oil. And, to continue in the personal experience vein, I don't get that smell or taste with safflower oil. It didn't even happen when my husband mistakenly bought a bottle that was already expired.

Now, if industrial oil that's been chemically enhanced and turns rancid isn't enough for you, how about taste? Read on for my other discoveries.

How many words of three letters or more can you make from the words...

I'll start you off with a few.

If you are one who still likes fried foods, and especially fried potatoes, you will be so impressed by the flavor if you try to make the dish in the picture from my own Flickr photo stream. Many people asked for a recipe there when I posted it a couple winters ago. I'm guessing on the amount of servings and prep time since those things vary depending on whether the potatoes are a meal or are served with a meal. And time depends on how quickly I slice the raw potatoes.

Cast your vote for Fried Potatoes with Smoked Sausage

...and how they affected my cholesterol.

Okay, so by now you know I pretty much despise Canola oil. I feel like it has totally changed the flavors (for the worst) on so many of the products I order in restaurants, and I would love to stop eating anything with added oil, or cooked in oil, from restaurants for that reason. Well, and because it would be better for my health. :-) However, for those times when I still want to fry things at home, I needed to find a replacement and it couldn't be olive oil since I wanted to find something my sister could eat and she has an olive allergy. (We've decided it may only be to the trees, but she did not want to take any chances.)

When I found safflower oil, I had just started taking milk thistle supplements to help clear an eight-year prescription of prophylactic antibiotics out of my system. I don't know if all thistle is created equal, but when I read they were in the same family, it gave me hope. Then, the wonderful taste of food after cooking it in safflower, plus seeing how much more was left over than what was left in the pan when I used Canola, were enough to make me throw out all my Kashi bars, chips made with Canola, etc., and start using and looking for safflower as much as possible.

And then, recently, A Woman's World magazine touted the benefits of adding just two teaspoons of safflower oil per day to your diet. Some of the benefits included a loss of fat and inches plus a change in insulin production that could stave off diabetes. In addition, the article stated how the use of safflower could build more muscle mass in women which would lead to an even greater reduction in fat and insulin production. With that article, my husband and I began adding the two teaspoons of oil to our morning Dream Protein shakes. With the oil changes, and now the added safflower, my husband's cholesterol took a 16 point dive in about 3 months. I haven't had a warning letter about my cholesterol in at least two years, which is about how long we've been using safflower instead of vegetable oil.

And while Canola is touted as an oil that does not raise your cholesterol, the manufacturers fail to mention that it actually keeps you from being able to lower it as well. I confirmed this with a friend, and I want to tell you the story.

Galen is a genius and an inventor and is married to my friend, Kim, whom I have known for over 30 years. Last time I visited Kim in Arizona, she had to take me around and show me some of her husband's inventions and creations. Among them was a truck he had converted to run on used vegetable oil and even discarded food, sticks, tumbleweeds, etc. He got about 45 MPG in the thing. I was just learning about Canola oil, so I asked him what he knew. He used a lot of it in the truck since he was able to get it for free or almost free by being willing to pick it up from the bins behind many restaurants. What he told me made perfect sense with the fact that Canola does not allow you to lower your cholesterol. He said it burns more sluggishly than all the other ingredients he used to run his truck. So, since our bodies make cholesterol to lubricate our muscles, we need to burn it off to keep it from building to a dangerous level. The last thing we need is to add something to our body equation that will make it burn more slowly and cause it to be more difficult to burn that stuff out of our muscles.

And, finally, that's why I now have a safflower solution.

Healthy Oils & Dream Protein on Amazon - It's not always easy to find these in the grocery store.

I'm hoping for the day Land O' Lakes makes a butter that is softened with a healthy oil instead of Canola. Oh, and I've included a link to the protein powder I use. Once you view it, you can search online for more information if this doesn't have enough. I started using it when I found out it was sweetened with Stevia and did not have any potassium iodide in it. And it tastes really good! Be sure to search around for best prices, but the link I included does have a good price comparatively.

Hollywood Safflower Oil, 32 Oz
This is the brand I use and enjoy.
Buy Now 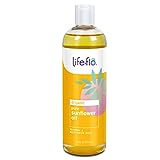 Life-flo Carrier Oil | 16oz (Pure Sunflower Oil)
This is one I haven't tried yet, but it's on my list.
Buy Now 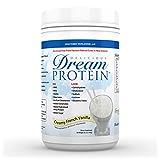 Your Favorite Oil - Choose your favorite and vote.

You may have more than one favorite oil, and you may change your favorite after reading this information, but I'd like to know what oil you have been using as a primary oil up to this point.

Which oil is your most-used oil at this time?

I thought about doing the debate module, but I decided on the poll with comments instead. I'd love to hear what you think about the oils, whether you learned something, if you tried the recipe, or whatever else. Oh, and you can also use the comments to tell me how many words you got from the words "Safflower Oil" as given on the sticky note. And, yes, you can count the six I started you off with.