As for all oils, fat provides all the energy in sesame oil, which is predominantly a mixture of polyunsaturated and monounsaturated fats. It is one of the poorest sources of Vitamin E of all the oils. Sesame oil contains about 40 per cent linoleic acid and 50 per cent oleic acid, plus a good amount of lecithin. A small amount of this oil should be used in preference to a saturated fat.

The oil pressed from the seeds of the sesame plant, Sesamum indicum.

Sesame is an ancient crop, believed to be the first annual oilseed ever cultivated. Domestication of the crop first occurred in ancient Persia. From there it was introduced to the Middle East, India, and finally Asia. Cleopatra is said to have used it as a skin oil, and thirteenth-century Venetian traveler Marco Polo praised it as the best oil he tasted during his journeys.

The crude oil is of a high quality, and is more stable than other oils of equivalent unsaturation due to the presence of natural antioxidants. The seed typically contains 45-55 per cent oil.

Sesame oil is available from supermarkets and Asian food stores. The crude oil has a strong, distinctive flavor and an amber color. Refined sesame oil is a pale yellow color, with a slight characteristic flavor. It should be free of rancidity and other undesirable flavors.

Store in a sealed container, at room temperature and out of direct light. 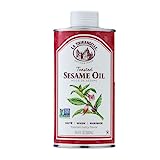 Sesame oil is used for much the same purposes as olive oil: for cooking, shallow frying and salads. It is used in Chinese cooking, mainly as a flavoring; in Japan, sesame oil is blended with other oils to fry tempura.

In Western society, small amounts of sesame oil are also used in margarine, prepared salad dressings and other cooking oils.

When heated sesame oil loses much of its flavor.

The oil is extracted from the seed mainly by pressing methods. It is prized for its individual flavor and may be used as a salad or cooking oil without refining. The seeds may be roasted before extracting, enhancing the flavor and giving a darker color.

Sesame oil is refined and hydrogenated before use in Margarine and shortenings.