The Art of Boiling Water

The Road to Dinner

"She cannot even boil water" is a description used to describe someone with little or no cooking skills. I doubt there is actually many people out there who don't know how to boil water - if there is - I show you how a little later. I am one of those people with less than stellar kitchen skills. I've been avoiding the kitchen since I was a child. Images of women chained to their stoves permeated by subconscious, but I found out cooking is not so bad if you look as you find the art in what your making. The first thing I ever really tried to make in the kitchen on purpose was a cake. I really though some of the fondant decorated cakes I saw were amazing so I had to give it a try. The cake turned out nicely (Check out My First Fondant Cake: A Beginner's Guide to see the result.)

The success I found baking gave me a little more confidence in the kitchen so I moved on to cooking dinner occasionally. I don't make anything fancy or elaborate. Most of my meals start with boiling water. This article shows you what develops from a pot of water boiling on the stove.

An egg in boiling water by Dick Mooranon Flickr, reproduced under Creative Commons license CC BY 2.0

Do You Know How to Boil Water?

So what is your cooking IQ. Mine is decidedly low but that's because I spent the early part of my life putting my fingers in my ears and screaming I'm not listening anytime the word cooking was mentioned. How about you?

How to Boil Water: Step One

Let's go over the basics before we start cooking. The goal of boiling water is make the water hot enough that it will bubble rapidly so that you are able to place food in the pot to cook it and then eventually eat it.

Find the place in the kitchen where your cookware is stored. Pull out a pot of the cupboard or pot rack and move slowly to the sink.Turn on the faucet and fill the pot with water. Don't fill it to the top to avoid spills. Half way to 2/3 of the way is good.

Now it is time for the scary part. Turn on a burner on your stove to high. Cover the burner with your pot and wait for it to start bubbling.

It will take a little while for it to start bubbling. In the meantime is there something else you could be doing. While your waiting you could jot down your to do list or enjoy a nice brewed tea or coffee. You could even throw a load into the dryer,

Finished - Water Boiling on My Stove

A popular beverage to serve at any function is tea. Many consider tea a soothing drink and it will be offered in times of distress or to settle nerves. It can easily be doctored to a persons liking whether they prefer it weak or strong.

So how do you make tea? With tea bags and boiling water, of course. The first step on the road to warm cup of tea is to start by boiling water in a kettle. 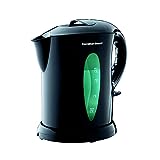 Hamilton Beach Electric Tea Kettle, Water Boiler & Heater, 1.8 L, Cordless, Auto-Shutoff & Boil-Dry Protection, Black (K6080)
The Hamilton Beach Lard Cordless Kettle is an inexpensive kettle option. I like that it detaches from the base giving you a cordless option. I also like that it features a shut off feature to prevent the kettle from boiling dry.
Buy Now

Chef’sChoice 681 Cordless Electric Kettle Handsomely Crafted in Brushed Stainless Steel Includes Concealed Heating Element Boil Dry Protection and Auto Shut Off, 1.7-Liter, Silver
The Chef's Choice Cordless Electric Kettle is a little more shiny than the above Hamilton Beach Kettle above but it preforms in similar ways/ The kettle detaches from the base for easy pouring and serving.
Buy Now 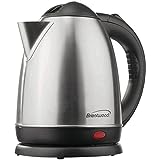 Brentwood KT-1780 1.5L Stainless Steel Cordless Electric Kettle
The Brehtwood Tea Kettle is another cordless option. It features a light up on/ off switch and a removable base.
Buy Now

I do not like salt Sam-I-am. Yes, I've read Green Eggs and Ham one too many times lately, but I digress. I do not add salt to my boiling water and this seems like a ghastly mistake to almost everyone who sees me boiling water. It is almost like I have committed the ultimate cooking sin so I decided to do a little research in to this.

It would appear people are worried that the food is not being cooked at a high enough temperature. Salt is supposed to be added to increase the water's boiling temperature; however, a pinch of salt will not be enough for the boiling temperature to climb the theoretical 2 degrees. Adding Salt raised the boiling temp to 102 Celsius; though you would have to add more than anyone would ever want in their food to make it happen. For particulars on this read Why Do You Add Salt to Boiling Water?"

The other reason to add salt appears to be for flavor. I can think of better ways to add flavor to my food so I will continue to give salt a pass.

I'd rather not cook with salt. How about you?

Do you put salt into your water before it boils?

The Science Behind Boiling Water

We have are water boiling on the stove. Perhaps, in the kettle to make tea. Staring at the bubbles as they burst through the surface your mind wonders about the science behind the boiling water - at least, mine does.

What temperature does water start to boil?

After turning the burner to high on the stove do you ever wonder how hot the water in the pot gets? At sea level, where most of us are now, water boils at 100 degrees Celsius or 212 degrees Fahrenheit; however, as we increase altitude the temperature at which water boils lowers. For example, according to Wikipedia, on the top of Mount Everest the boiling temperature of water is approximately 71 degrees Celsius (159.8 degrees Fahrenheit).

Why do bubbles appear when water boils?

Bubbles that indicate that water is indeed boiling are the result of molecules trying to escape the water when the water vapor pressure is equal to the pressure that surrounds the liquid.

Thermometer by Ben+Sam on Flickr, reproduced under CC BY-SA 2.0 license

Make sure you point the handle of your pot inward if you are cooking with young children in the house. You do not want little hands to be able to pull down the boiling water on them. Boiling water can be dangerous. My nephew has the scars to prove it.

If boiling water hits anyone skin you need to quickly access the damage. For severe burns or burns covering a large area you will need to call an ambulance or seek medical attention as soon as possible. You will see the burns on the outside buy you will not be able to see if any damage has been done internally.

Do not cover someone with hot water burns with a blanket to dry off water. The fabric can be get stuck in the wound area and cause more pain later as the wound will need to be cleaned so infection does not set in. You will want to make sure clothing is free of the wound area for the same reason..

For smaller burns like on a finger head directly to the sink. Apply cool water to the burned area to help the heat escape.\

"Think: The safe way is the best way by 4nitsirk on Flickr, reproduced under CC BY-SA 2.0 license

What Will You Cook?

From reading packages, watching people cook around me, and my occasional adventures in the kitchen I know there is a large number of foods that can be boiled. Some foods are sweet, some are filling and some are satisfying.

Things that can be boiled

One of my favorite things to boil is potatoes because it gets them one step closer to being mashed potatoes.

Hard boiling eggs is a simple process. Boil water (process shown above) and add eggs. Boil for about 15 minutes for a hard boiled yolk. Soft boiled eggs you only need to cook for 3-5 minutes. For medium yolk eggs boil them for 8-10 minutes.

The video below by RVgeeks shows you how to get you hard boiled eggs to peel away from the shell without pieces sticking to the egg. This is annoying problem when you have several eggs to peel when your making deviled eggs. Believe me, I know. This tip which includes pouring ice on your eggs which help you get through your task a little faster and without the frustration. 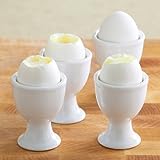 Egg Serving Cups Set of 4 cups
When I think about Egg Serving Cups I cannot help but think about sitting around the breakfast table at my grandmother's house surrounded by family. One of her favorite things to make us was a boiled egg. I always got mine soft boiled. She would set them in her Egg Cups and slice off the top part of the egg. She would give us a spoon and we would eat our eggs of the cup.
Buy Now

Share your favorite recipes or ideas for cooking with boiling water.