But you are used to the standard American diet. That's the diet I call the "McDonald's Egg McMuffin for breakfast, Burger King Whopper for lunch and Kentucky Fried Chicken for supper" diet. Or you have been raised on the home cooked pot roast and potatoes (the old "meat and potatoes") standards. How do you shift over without feeling deprived?

I've been a vegetarian now for 30 years. And I've been a vegan for 18 years. Needless to say, I developed some "tricks". I personally love to cook, but only when I'm in the mood. I also like to have some easy quick recipes to throw together.

First of all, I (like most vegetarians I have met) didn't become a vegetarian because I don't like meat. I happen to love meat. When I was a teenager, my family used to call me the chicken hawk (after the little guy in the Foghorn Leghorn cartoons) because I loved chicken (dark meat) so much. When I was in high school, I got home from school late and didn't usually get home until 6-7 pm -- by which time, my younger siblings and my parents had already eaten. So I would take a bottom quarter of a chicken, throw it in the oven, and that was supper most of the time. I still haven't found anything that tastes like a broiled rib steak or pastrami or corn beef (believe me, I've tried!). And when I became vegan, there went ice cream and milk chocolate (another two of my favorite foods).

What do vegetarians eat?

Fortunately, there are so many vegan substitutes these days for non-vegan food. Having grown up in a kosher home (where meat and dairy are not mixed together), the first time I ever had a cheeseburger was after I became a vegetarian (soy burger and dairy cheese at that point). Now, I have cheeseburgers (soy burger, vegan soy cheese) with a couple of strips of soy bacon (pig products aren't kosher at all, so I never tasted bacon that wasn't of a soy origin). My milk is made from rice or soy or nuts. My meat is made from soy and wheat gluten. My cheese is made from soy. My butter is non-hydrogenated and made from soy and vegetable gums. I use pumpkin, flax seeds, apple sauce, and sometimes rice milk or mashed potatoes to substitute for eggs and/or shortening. Oh, and by the way, since I became vegetarian, I have lost about 80 pounds (granted, that is 30 years of weight loss, but, heck, a weight loss is a weight loss), my blood pressure (which in my 20s was high normal) dropped (to currently normal), my cholesterol dropped. I have a feeling if I hadn't become vegetarian and then vegan I probably would have had a stroke before I was 40.

I know a lot of people just want to stick with their comfort food, and that's ok. (If you have a recipe for a comfort food that you'd like to have me convert, feel free to write a request as a comment and I will try to incorporate your recipe into a future lens). Another good place to get recipes to adjust is women's magazines. 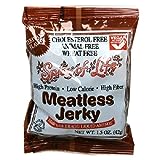 This canvas bag is only one of several Vegetarian themed items at our store: