Weird Icecream Flavors From Around The World

Weird ice cream flavors are on the increase all over the world. Just about anywhere these days, you can get weird and unusual flavors and even some that sound truly revolting.

Now I don't know about you but I really enjoy a nice bowl of my favorite icecream. In fact I enjoy a lot of the traditional flavors that are around. By it's self or served with other delicious sweet treats it has to be everyone's favorite.

The really big question here is - would I be brave enough to actually try some of these weird icecream flavors, if they were offered to me. Perhaps if you don't tell me what it actually is, then maybe I would give it a chance, but honestly, the thought of some of these is a big turn off.

Check them out and let me know if you would try them..

It's a world wide phenomena

No matter what part of the world you live in, these days, you're bound to encounter some very unusual ice creams. I've listed them according to what I think is the most awful. Perhaps you'll disagree with my choices.

1)Horseflesh- Raw horseflesh - that's right, it's raw meat in your favorite dessert. From Japan this is top of the list for gross and most horrible.

2) Spleen and artichoke - Enough to make you puke, don't you think? You can get this in Italy

3) Shark fin - I've heard of shark fin soup, which sounds bad enough to me but why would you ruin a perfectly good dessert. Another one from Japan

4) Garlic- Are you going to keep the vampires at bay with this one. Not sure where this originates from.

5) Sardines and brandy - The brandy part's OK but I don't get the sardines part. Too weird for my tastes. You'll find this in Puerto Rico.

7) Sauerkraut - Why would anyone add pickled vegetables to spoil a delicious dessert. This one's from Europe too.

8) Cod fish - Oh dear another one that smells too fishy for me. The Japanese do love their fish.

9) Spaghetti and cheese - Bits of spaghetti with cheese and sometimes served with raspberry sauce. Sometimes this one is actually fake - as you'll learn further down the page.Another one from Puerto Rico.

10)Blue Stilton cheese - One of those strong and very smelly (like sweaty socks) cheeses that some people love. Again why would you mix it with icecream? Get this in Ireland.

So that's my current list but there's so many more unusual and horrible ones listed below. I just keep finding more!

The above ice cream parlor photo, is in the public domain

Who Likes Ice Cream Parfait? - But please don't eat it!

I spotted these decorative candle that looks so real, don't you think. They would make a nice table centerpiece or a great gift, but please don't eat it, that would be just too weird!!

You can also get strawberry sundaes, fruit salads and even cupcakes that look real too. 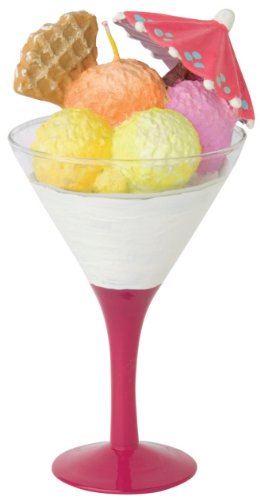 Boston International October Hill Decorative Novelty Candle, Ice Cream, 7-Inch Tall
This decorative candle looks so real, don't you think. Would make a nice table centerpiece or a great gift, but please, please don't eat it. That would be just too weird!! You can also get strawberry sundaes, fruit salads and even cupcakes that look real too.
Buy Now

Anyone For Bacon Icecream? - Should I eat this for breakfast?

Try making this one yourself. Here's a link to the recipe for candied bacon icecream. Apparently some people say it's quite nice.

I found quite a lot more weird icecream flavors including things like curry flavor carrot. One wonders what people are thinking when they create these things.

Are you supposed to eat them for dessert or perhaps an entrée?

Here's a few more for you:

Blue Cheese and Shallots from Ireland

Curry Carrot I've even found the recipe if your interested in trying it.

Dondurma A Turkish icecream with added "salep" a flour made from the root of the Early Purple Orchid and "mastic" to make it chewy. Sometimes it's so thick you need a knife and fork to eat it. Now that seems weird!

Candied Bacon quite popular and perhaps the least repulsive.

Beer Flavor I don't think so

Viagara Hmmm, any icecream can be a turn on for some folk.

Drunken Kiwi Kiwi fruit with some kind of alcohol I presume. Maybe not so bad if you like kiwi's.

I've even heard about someone setting up an icecream van for dogs. Seriously what will people think of next. Talk about pampered pooches.

Photo by Editor B

Who Invents These Horrible Concoctions?

and more importantly why?...

Since discovering all these odd sounding desserts, I've been curious to know just who and even worse, why they would have such crazy notions.

Imagine that one day you fancy some ice cream but all you've got in your freezer is plain old vanilla. So you ask yourself, "What can I add to make it more interesting". You look in the pantry and see a tin of sardines and you think yeah, that would be great. I mean really! Are you crazy.

How about baked beans? Oh I just had a great idea. What about Vegemite? We Australians love our Vegemite. We're the only country in the world that does but perhaps that combination could be a real winner in this country. I don't think so. For those of you that don't know, Vegemite is a blackish colored spread, somewhat like Marmite or Bonox, that you eat on bread or toast.

Seriously, what are people thinking when they create these things?

What Do You Think Of These Flavors? - Have your say. Let everyone know what you think about these weird flavors.

Would you try any of them?

If you know anything about icecream you may have heard of Henry Slocombe's intriguing selection. Based in San Francisco this shop sells a range of unusual flavors that are quite popular. You'll find things like secret breakfast or peanut butter curry to tempt your taste buds. Well now you can try them out for yourself.

Humphry Slocombe Ice Cream Book
This book has around 50 recipes including many of their most popular ones, and includes photos and interesting anecdotes to provide fun reading.
Buy Now

Spaghetti Is Not My Idea Of Dessert

Now things are getting really scary. This craze for strange flavors is right here on our doorstep - in the States. In this country you can now buy some weird, if not very unusual flavors.

Here's just a few that I've heard of:-

Boccalone Prosciutto - Its got cream cheese and real prosciutto in it.

"Red Hot" Banana - Banana with one of those hot candies crushed in it.

Secret Breakfast - Cornflakes and bourbon? Apparently this ones popular. I wonder why?

Peanut Butter Curry - Speaks for its self.

Skull Splitter Root Beer - No idea what's in it other than root beer.

In England the restaurants are serving some pretty weird flavors like cigar smoked icecream, mustard flavor, pigs blood and chocolate and even more whacky flavors.

It's not safe anywhere. There's some odd ones here on this short video. Even Ben & Jerry's have some pretty strange sounding products - like squirrel nuts and mustard.

Some brave souls have actually eaten some of these. If that's you, please tell us right here which ones you tried and if you enjoyed it or not.

Seems to me that many folk do actually enjoy them otherwise manufacturers wouldn't keep making them!

Weird Flavors are Enough to Make You Stressed

So, what do you think? Would you give some of these weird flavors a go?

I'd really love to hear your views on this one.

Weird Ice Cream Flavors Feedback - How brave are you really?