Do you love vanilla ice cream too?

I learned so much making this lens about vanilla ice cream.

For instance, I learned that Marco Polo may have brought the first ice cream-like stuff to Italy from China. Who knew?

Also, there are stories about Roman emperors eating ice cream! Well, it was made out of snow and honey. But it was close.

Is vanilla YOUR favorite flavor of ice cream? I know it's mine.

Read on and find out some more facts about it. Then vote for your favorite flavor of ice cream. (Hint: VANILLA is a good choice!)

This photo is of ice cream in Paris. It was taken by Vicci, who has a blog called moon, stars and paper.

For me, it's all about the flavor, the memories, the fragrance, and more.

There is something about vanilla ice cream that is just so great. I never get tired of the wonderful flavor.

It tastes pure and natural. Also, vanilla ice cream doesn't stain clothing or couches as easily as other colors of ice cream.

I have wonderful memories of eating vanilla ice cream in the past. Just breathing in the smell of vanilla makes me feel good.

Vanilla ice cream is unique because you can most easily add other flavors to it if you want. It also goes with so many different desserts. After all, what is apple pie (or ANY pie) without vanilla ice cream on top?

My favorite way of eating vanilla ice cream is PLAIN. Just by itself.

If you want to make your OWN vanilla ice cream, you need NATURAL vanilla. - Natural is just best, for many reasons. 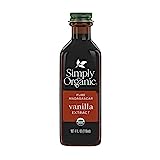 Simply Organic Pure Vanilla Extract, Certified Organic, 4 Ounce Glass Bottle
I have used this brand before. And glass is a good container for it.
Buy Now 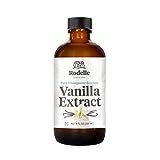 Rodelle Pure Vanilla Extract, 8 Fl oz
And here is another kind to pick from. It is Certified Organic.
Buy Now 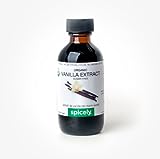 Other people also are crazy about vanilla ice cream.

It's the most popular ice cream flavor. Other flavors are also popular, but most people (like me) like vanilla best.

And some people are way TOO crazy about vanilla ice cream. - Have you ever known somebody like this?

Notice she is eating the vanilla section first.

It is in the middle.

And WHY is she eating it first? Because it is the best flavor!

Did you know... Real vanilla comes from an orchid!

Now vanilla is grown all over the world. There are several types - - and much is grown on plantations.

Real vanilla is said to be the second-most expensive flavoring because the making and gathering of it is very labor-intensive.

You can buy vanilla at the grocery store, or from specialty shops or vendors.

Vanilla is dried - - and the dried sections are called vanilla beans.

I wonder... who makes the BEST store-bought vanilla ice cream?

On this site, HÃ¤agen-Dazs gets the most votes.

You can make ice cream at home now, and not just at summer camp or outside.

Here are some great recipes that you can use to make TERRIFIC vanilla ice cream.

Here are some recipes from online sites.

This girl loves her vanilla ice cream cone. - She had better lick the bottom of it right now before it falls off.

I guess I'd better say that some people do prefer other flavors of ice cream besides vanilla.

But this group does not include me - - usually.

And also vote here. What flavor ice cream do YOU like best? - I hope it is vanilla. Just saying.

Which type of ice cream is your favorite?

You can also vote for YOUR favorite ice cream at the voting poll below here.