John is a fervent writer, gamer, and guitar lover. He is a former automatic-transmission repairer, welder, and hobbyist game developer.

With the ever-growing popularity of online content creation as a means of income, and with the gaming industry being bigger than ever, it’s no surprise that that more and more people are able to call themselves professional gamers.

Making a living playing video games was the childhood dream of my generation, but back then there was no realistic way to make that dream come true. These days it’s not so much a question of if you can be a professional gamer as much as it is how you’d like to be a professional gamer. Fortunately, this hub is here to help.

There are many paths to getting paid to play video games, and to be honest with you, they all involve hard work in some form or another. It’s up to you to choose the path that suits you best.

We’re going to look at these three main avenues through which you can earn a living playing video games and what they entail, and perhaps from there you can go on to make the dream of a generation come true for yourself.

Much like regular physical sports, eSports involves competition between gamers, often a very elite few. Typically games that are entertaining to watch, such as shooters and fighting games, will be competed by players with inhuman twitch reflexes as they battle each other in increasingly large venues.

The analogy to real sports is an apt one. Millions—maybe billions—of people play football/soccer on a regular basis. Not many get paid to do it and far less get paid well. That’s because football is immensely popular, and only the best of the best can reach a level where they are handed million dollar contracts. Being a professional gamer in eSports is much the same. If your skills in a particular game are not so good it's dumbfounding, this probably isn’t the career for you. At the very least you should be the best gamer among your friends. Unless, of course, your friends are also looking to be pro gamers! 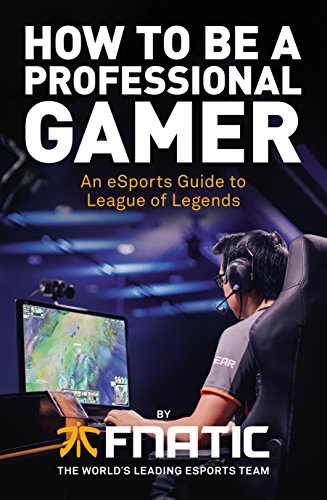 How to Be a Professional Gamer: An eSports Guide to League of Legends
Buy Now

There are a few things to consider in this line of work. Firstly, as mentioned above, your skill level is essential. If you’re not good enough, you won’t make it in eSports. The next thing is your style of game. Look at what’s popular in eSports and be sure there’s an audience for the games you want to compete in, because no audience means no revenue. League of Legends is a particularly popular game for eSports, to the point that there are books written on the matter. Finally there’s your personal circumstances to consider. Successful eSports gamers spend a lot of time travelling from event to event, which may be fine for young, free and single gamers, but if you’re an older gamer, perhaps one with a family to think about, this probably isn’t the life for you. Even if you are good enough to compete.

The goal should be to find a team and, ultimately, get sponsored. Sponsorship is where the real money comes from as it’s not dependant on winning competitions (though there will likely be performance expectations tied to a sponsorship). Once you’re in a team, you should look to enter as many tournaments as you can for exposure.

And, of course, win.

Let them know what you think.

Reviewing games has become a bit of a muddy area of late, with recent events online causing many gaming media outlets to attack their audience, and that audience to subsequently lose all faith in those outlets. As a result of this, aiming to get hired by a more traditional gaming news outlet might not be the best route to take, however it does leave a space in the market for talented independent reviewers.

The key to being a successful game reviewer is to build up a following who are interested in your opinion. You want people searching for a particular game to stumble across your review, of course, but the bread and butter of a game reviewer (or any online content creator for that matter) is an audience that wants your content specifically.

Game reviews can be doled out in many mediums—blogs, podcasts, videos, etc—but if at all possible you should try to offer your content across multiple platforms, and even better if you can create unique content for each medium. Of course you’ll still be conveying the same message, but if your podcast is just you reading the review you’ve written word for word, your audience aren’t likely to check out all of your content, whereas if your podcast is perhaps a discussion of the game with a guest, it offers your audience something new that might entice them to check out both versions of your review, thus increasing your opportunity to monetise.

One trick to getting noticed as a game reviewer is to review games on services such as Steam. Reviews on platforms like Steam should be short, entertaining, and give value to the reader. You want them to want to read more of your stuff, but avoid simply posting a snippet of your review and a link to “read more”, as that just comes across as spammy. Reviews like this should be self contained and able to exist as a stand alone thing, then you can mention that you’ve written a more in depth review on your blog. If you do decide to go independent here, you would monetise your gaming career the same way you’d monetise any other blog or website.

Let’s Play, or LP, is the name given to the act of capturing your playthrough of a video game so that others can view it. Most of the time the gamer will be commentating as they play, and often times the playthrough will be streamed live so that an audience can interact with the gamer via chat at the time of the playthrough.

In terms of difficulty, becoming a Let’s Play gamer is probably the easiest way to get paid playing video games if you can do it well. The key here is that you have to offer the audience something they want. Precisely because it is relatively easy, there are many, many people doing it, and as such a simple play through of a game won’t get you much of an audience because there will be dozens of other people with a video of the same game.

In order to get an audience for your LP videos or streams, you need to be offering something either entertaining or informative. Some of the most successful YouTuber’s to date create Let's Play videos where they commentate as they play and have gained success by being funny. Other’s create informative videos explaining how to do certain things in a game as they play such as with the example Cities: Skylines video below. If you’re not giving the audience something they can’t get elsewhere, they’ll probably just go elsewhere.

If you’re entertaining, or you have a strong grasp of a complex game that many struggle with, then the next step is to plan your strategy. If possible you should always stream live as part of your content (for many LPers streaming is their only content), but it’s also worth branching out into other areas to give your growing audience as much opportunity to consume your content as possible. Consider making short highlight videos of your live streams. Write accompanying blog posts to go with your videos.

There are many ways to be paid as a Let’s Play content creator. The traditional YouTube adSense model applies, but there is also Twitch (a game streaming service) subscriptions, not to mention Patreon and other forms of voluntary donation.

The key to all of these methods is your audience. You won’t get a sponsorship in eSports without a big enough following to attract sponsors, you won’t get enough regular hits on your blog without a core audience, and you won’t make any money streaming video games if no one is watching.