Ticket To Ride Board Game Review

Ticket to Ride by Days of Wonder game company has been on my radar for quite some time, since after all, it was the winner of several board game awards, and members of my uber-educationally-minded family have been talking it up for the last few years. But I wasn't convinced that I needed to run to the nearest mall and buy this game. After all, sometimes award-winning products are riding on the hype surrounding their awards. But I finally sat down and played this game with my family, and now I'm a true believer.

This fast-paced game requires the player to use skill, strategy, and luck to build a series of interconnected railway lines from city to city across the board. This game combines matching and collecting skills of rummy card games with strategic elements borrowed from well-known board games like Monopoly and Risk, and uses some friendly blocking tactics borrowed from more recent games like Jax' Sequence family of card games.

This game has a complicated-looking board, and each player uses a Monopoly-esque set of plastic colored train tokens to show their rail lines on the board. During each turn, a player may collect colored train cards, collect destination cards, or build a segment of their railway line. It is all a bit daunting at first, but learning to play this game isn't as difficult as I expected it to be. After one game play, which took a little longer than an hour, I understood the basic rules of the game and started formulating some opinions about player strategies, which I put to the test during my second game.

Buy A Ticket to Ride Online 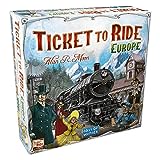 Which Version of Ticket to Ride Do You Prefer?

As a parent, I love the educational element of this game. The USA version of the game features a map of the United States with major border cities from Canada and the United States. Play this game 5 or 6 times and you and your family will develop geographic awareness of major cities in all parts of the United States and some major ciities in Southern Canada. But another educational aspect of this game is the strategic element. It quickly becomes evident from playing this game that building lines from one end of the nation to the other can be complicated if you don't have access through the middle parts of the board, and connecting various cities can be easy or difficult, depending on your opponents' goals.

One of the real measures of this game's success in my family was how enjoyable the game was to play, even when we were losing. The nature of game play discourages some of the underhanded strategy that I experienced (and dished out) with Monopoly. Inhibiting other player's progress is fun to do, but at a cost to yourself, because each player has a finite number of train cars, and you may find you need those pieces to score extra points connecting cities that are geographically distant.

This is a fun game to play, and though the Days of Wonder company recommends for players ages 8 and up, a smart six or seven year-old could probably play this game without much difficulty, though the finer points of strategy may be lost on this younger age group. The only downside I can possibly foresee for this game is the need to make sure each player has the exact number of train tokens at the beginning of game play. Depending on which version of the game you are playing, the boards and possible train routes vary in size and difficulty. Check out the game board images.

Ardent fans have also created alternate boards for the game. I even saw a China game board on the internet, but several of these game boards must be printed from the internet and aren't sold by original makers of A Ticket to Ride.

Electronic Version of A Ticket to Ride

If you grew up playing Stratego or Risk, you will really enjoy this game, which doesn't require hours upon hours of time commitment. You can even play the game online on an XBox 360 gaming system. The game is currently sold only on the XBox 360 game system and requires an online game code and an internet connection for play. Personally, I prefer the tactile experience of moving the game pieces around on the board.

Join the community of writers on HubPages now. It's fun, free, and you can get paid for writing about the topics you love.

Ticket to Ride [Online Game Code]
This XBox 360 game download is only available to residents of the United States and requires that the buyer accept the company's terms of service.
Buy Now