The design of the coin and the history of the buffalo nickel is what attracts most collectors to the American Buffalo gold coin. The sculptor James Earl Fraser was once a student of Augustus Saint-Gaudens who himself designed some of the most beautiful coins in American history. The obverse of the gold buffalo features a profile of an American Indian. The portrait is not of a single person, but rather a composite derived from three different people. There is quite a bit of debate as to the identities of the models, but it is believed two of the three are Chief Iron Tail and Chief Two Moons while the identity of the third has never been confirmed.

As with any other bullion coin, you can buy them directly from the U.S. Mint (if they are in production).  Once they leave the Mint, you have to go through a dealer.  Unless you are buying them directly from the Mint, I would strongly suggest that any high end coin you purchase on the secondary market be graded by either NGC or PCGS.  Those are the two most reputable coin grading services and is the best insurance from getting scammed on auction sites or by unscrupulous dealers.  There are other services which I will not get into here, just make sure you stick to the top two. 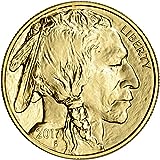