I Feel Some Movement Coming On...

The original Back to the Future video game on the NES is pretty much one of the worst video games ever made aside from ET. This game basically ruined your entire childhood. I wouldn’t be surprised if lawyers have used this game as a defense in court. “Your honor, my client received the Nintendo version of Back to the Future for Christmas when he was 9 years old. I move for dismissal of the case.”

LJN was behind the release. They pumped out some of the most putrid games imaginable, and this was among the very worst. In the game, you play as Marty McFly. Instead of trying to get Back to the Future like in the film, this video game gives you the goal of trying to find a toilet. Isn’t that what it seems like Marty is trying to do? He won’t stop running! He’ll run through a plate of glass to get to that toilet. He has to go very badly.

LJN actually came out with a real life Toilet Adventurer Playset to go along with their video game. Don’t believe me? Here’s the old advertisement:

The Keep It Classic Nintendo Shirt. Finally, a Shirt That Tells People Who You Are and What You're All About. 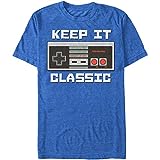 The actual game itself is terrible. The music is pretty much just the starting notes from Huey Lewis and the News’ “Power of Love” played over, and over, and over, and over. It’s seriously only like 8 notes that repeat constantly. Then there’s a short interlude of ass beeps once in a while. It’s enough to drive anyone crazy. Even when you lose and go back to the opening screen, the music keeps on going.

A Mario Plush. So Cute. Get One Now. 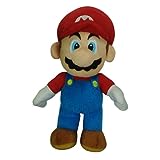 Here's a Speed Run of the Whole Game:

Basically the game is about 15 minutes of Marty running around looking for a bathroom. Good job, LJN. What’s the deal here? Were there like no toilets back in 1955 or something?

To be fair, it is kind of hard to turn the plot of Back to the Future into an innocent Nintendo game. “Okay, so Doc gets shot with an Ak-47, and then Marty makes out with his mother…” Yeah, but they really could have done so much better than this fecal matter that they released. The Toilet Adventurer Playset was way funner than the game it was based on.

If you or anyone you know of was forced to play this game as a child, find help. It's only a phone call away. Don't resort to a life of crime and lewd behavior because your dreams of a decent Back to the Future video game were shattered by LJN Toys.

There really ought to be a class action lawsuit in here somewhere...

You Probably Threw Out Your Nintendo After Playing This Filth and Bought a Sega Genesis. Buy a Sega Genesis T-Shirt, Then. Here's a Good One.

Read About More Video Games on My Main Page:

Did This Game Ruin Your Childhood?