Base Wars on the NES - Worst Nintendo Games of All Time

Brought to You From the People Who Also Made Poop in Their Pants... It's Base Wars for the NES!

You know what happens when you combine the pastoral action of baseball with something futuristic and incredibly retarded? Base Wars on the Nintendo Entertainment System, that's what. This game is a half-decent baseball simulator that someone took a crap all over. The game makes no sense at all. It's sort of like if you took NBA Jam and combined it with Mortal Kombat. Hrm... actually, that doesn't sound half bad, huh? Raiden is gonna dunk all over your ass.

So the concept of the game is pretty stupid. You play baseball. Right, we got that. Okay, and your team is made of futuristic robots that make absolutely no sense. What the hell is up with the guy whose legs are tank treads? How does this dude go up stairs and stuff? What a crappy ass robot!

Old School Gamers Need a Pack Like This. Get Yours Today on Amazon. 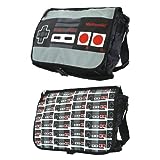 Be Warned, Viewing This Footage May Lower Your IQ Several Points. It's Base Wars on the NES Gameplay.

So the game play is... well... it's baseball. We've all played bases loaded, which is a decent baseball game on the NES. Where does the fun come in on Base Wars, you ask? Well, you know how you have to tag people out and stuff like that in baseball? Well, in Base Wars the robots BEAT THE CRAP OUT OF EACH OTHER. Does that make ANY sense? What sort of schizophrenia did the design team have in order to come up with this garbage?

The game might be kind of interesting but it has one flaw... it's on the NES. Yes, that's right. One on one fighting games weren't really the strong point of the Nintendo Entertainment System, mostly because the controller only has two buttons. So, Base Wars basically suffers from this problem. Some of the robots are just freakishly overpowered, too. Guns vs. slapping and kicking, eh? Smart.

Two controller buttons basically means this in most fighting games: Punch 1. Kick 2. Then they got clever and thought of pressing both at the same time. That button combination usually resulted in the game player realizing they were wasting their time on the NES, and playing Super Nintendo instead with its 6 button controller.

What... Why? Seriously, Why? WHY Did They MAKE This?

There's basically not much else to say about this piece of crap. The designers were schizo, and they programmed this butt chunk of a game in a mental institution. The gameplay is fast. The fights are... freakin' weird! Sometimes you're some robot dude trying to pimp slap some guy with a gun, and he just shoots your ass down fast. It makes no sense. I don't even get it. I'm not even going to try. I don't want to try. You should definitely not try, either.

Any sane person should attempt to contact mental health professionals if at any time they have found this game to be "totally awesome."

The only reason that Base Wars on the Nintendo Entertainment System doesn't get shoddy, crappy reviews is because the music is half-decent, and the baseball action is fast. Yeah, which also means you're done playing faster. Thank goodness. This game belongs up a camel's butt crack, never to return. If NASA had put this game on the Voyager II satellite and aliens found it, they would think we were a planet of completely insane morons. Which, apparently we are. This is what we make. Congratulations, human race. You win.

Read More Video Game Pages Like This One on My Main Page!

Does this game stink link a pile of rotting dung, or did you like it?