Patrick Henry once described the Christian Bible as “a book worth more than all other books that were ever printed.” The Bible, without question, is the most influential book in history. Despite this influence, absorbing accurate biblical information is often a major challenge for most people. Many people simply find Bible study unexciting. However, unique Bible study trivia ideas offer inventive, fun and exciting way for students to learn all about the Bible, memorize and reinforce their knowledge of biblical characters, places and events.

The “Bible Hoops” trivia game is based on the game of basketball and requires the use of a ball and a hoop. A child-size basketball and hoop are perfect for this game. Mark off an area around the goal that students will stand behind to shoot the ball. Select a leader to act as “referee” and divide the students into two equal teams. The “referee” is responsible for asking all trivia questions and scoring the answers. The game starts with a “jump ball” question which can be answered by either team. The person who answers correctly gets two points and the opportunity to shoot the basketball for two more points. Then, it becomes the opposing team’s turn to answer a trivia question. If the question is answered correctly, a team player shoots for two additional points. The game continues in this manner until one team reaches a predetermined winning score. When a team fails to answer a question correctly, the opposing team may “steal” by giving the correct answer and gaining the points. The referee may also opt to call “fouls” on players who answer out of turn, resulting in the opposing team gaining control of the question.

The “Guess Who” game involves writing the names of Bible characters on cards or pieces of paper. Arrange the students in a circle and give each of them one of the cards. Pick a starting point and give each person one minute to give clues about the character on their card. If no one guesses correctly, then move on to the next person. Continue play around the circle until all characters have been identified. As an added incentive to participate, award a small prize to the player who gives the most correct answers.

“Who Done It” is a fun trivia game which involves one person providing simple two-word questions to a panel of players. The questions are based on notable actions or events that surrounded certain bible characters. An example might be, “Who betrayed?” The answer, of course, is “Judas Iscariot.” To make it more challenging, have teams compete in rounds of ten questions each. The team with the most correct answers at the end of the round moves on to play another winning team until only one team is declared champion. 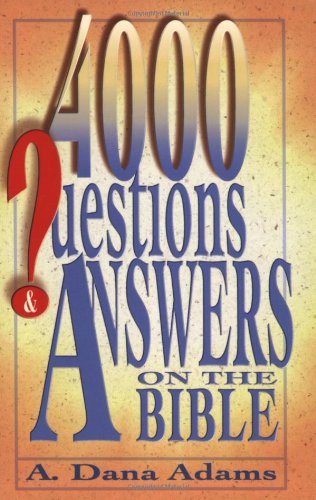 4000 Questions and Answers on the Bible
Buy Now

These are great games that can facilitate a fun atmosphere and get everyone involved. As students get involved, the more they are able to learn and retain. That’s what it is all about, right?

Here are several good Bible trivia quiz and answer books that can get your imagination going. They can also be wonderful Bible study tools for anyone who wants to get deeper into God's Word.

So what are you waiting for? Get your students involved and have fun doing it!