Being of Italian descent, it is only natural that I would end up learning and becoming an avid bocce player. I wasn't always interested in bocce. It was only after starting an annual reunion with the Italian side of the family that we began looking for games and activities to make the reunion fun and interesting so that we could attract as many of the aunts, uncles and cousins as possible. Bocce was the answer!

It is an easy game to play and all ages enjoy bocce. At a very recent family gathering one game included players from 5 years old up to 75 years old. On father's day this past year I was in a game with my son and 5 year old grandson - the two against me and the advantage kept shifting back and forth until it came down to the last ball of the game - the last point. Either side could have won - I was feeling pretty certain that I had the final point and game in the bag with two balls closest to the pallino. My grandson had the last throw, so I was all ready to accept their congratulations when he made his final toss. His ball was as fine a shot as he could make and it slipped in right between my two balls and next to the pallino - point advantage to him and my son! I was shocked and proud that I had lost a very close game on a throw by a 5 year old. It made for a very happy fathers day.

Bocce is a simple game and for casual players no special skill is required. You need a minimum of two players - a set of 8 balls of two different colors and a pallino. The pallino is normally either yellow or white and a smaller ball than the other 8 balls. You also need a court which can be almost any surface. Your options range from the back yard to professional courts. People play on grass, sand, gravel, concrete, clay or what ever is handy. Softer surfaces will allow the balls to dig in and make them roll slower and harder to control. Hard surfaces like concrete or clay makes for a very fast rolling ball and less control. The most common surface is playing on grass in the back yard. You need to mark off boundaries on each end and the sides as well as a center line. Voila - you have a court.

After deciding who goes first, the pallino is tossed onto the court and must pass the center line without touching either the side or end boundary. Accomplishing this - the game has officially started. Then the player who set the pallino tosses or rolls his first ball and tries to get as close to the pallino as possible. Then - depending on your house rules - the game either continues with alternating throws by each player - or continuous throws by the first player and then four consecutive throws by the second player. The game is decided by who's ball is closest to the pallino. If the player with the closest ball also has other balls that are closer than the competitor's balls, they score a point for each ball. Games end at varying number of points - decided in advance - usually anywhere from 11 to 15. 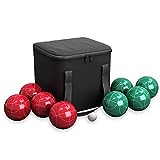 Taking it up a notch

In a future article I will describe how I built my own bocce court - complete with photos.

What surface do you prefer playing on?