Christmas has been and gone and with it my sons Lego collection has expanded. This year I have invested in the Lego Alien Space Conquest collection most of which is packaged for aged 8 to 14 years but as with all Lego, the upper age limit is extendable. I was in the grocery store having a discussion about the merits of the new Mother ship with the Man on the counter- our combined age was well over 100 years! 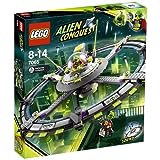 The Lego Space Alien Mother ship is a space ship with an outer ring around it, which spins independently of the ship and makes a rather strange sound. Warning to parents, it really can get on your nerves once you have got over the panic of what that noise is! My 14 year old son made the set up quite quickly though there were a few pained moments when things did not go quite right so a younger child may need some parental help.

There are some neat mini figures with the set including the Alien commander who drives the ship and a reporter. The Alien Commander sits in his covered dome and has tentacles with a green head, and also a red cloak, almost as if he is ready to come to life! When he does he operates an abducting claw that can carry the mini figures away! The set seems pretty strong and reliable having been demonstrated over Christmas by my son who is a big and clumsy teenager. I think that younger children might like to use the ship and create battles using other Lego in the collection or even any of the Lego Star Wars. 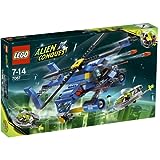 Lego Space Jet Copter Encounter- Initially I was a bit disappointed as it was blue, not green but then my son explained that it was attacking the Aliens rather than being an Alien, which explained the difference! At first glance it looks like a helicopter gunship but it has a few added extras; a detachable prison pod for keeping safe the aliens that you manage to capture and some cool dual flick missiles for when you go into battle against the mother ship, which actually looks pretty small in comparison to the size of the Jet Copter. This set is a play situation in itself as it includes an Alien craft with pilots- when entering into battle the alien craft can split in two making it much more of a challenge to shoot down. It was easy to make and quite solid- it has not broken up yet!

Lego Alien Conquest Tripod Invader- I bought this set in December and gave my son a few pieces every day with the instructions given on December 24th, he really liked it and kept trying to make it, despite not knowing which set it was! (I was going to get him the Lego Star Wars Advent Calendar but it had sold through). This set has the Alien spacecraft on legs- really like in the War of the Worlds. It comes with two mini figures- the alien pilot and the businessman, complete with briefcase, which the alien is chasing. With a moving saucer that can be removed to capture the human, moveable laser guns and pose able legs this set is a play set which stands alone. Again. Once I gave him the instructions this set was easy for a 14 year old to build and has survived Christmas.

There are other Alien sets and as we (or should I say as my son) gets more pieces I shall include them.