In 1977 the Star Wars film launched onto the film world and the unsuspecting public. Now, some 33 years later Star wars and the sequels that followed have captured the imagination of a new generation of young people

Lego have produced some fantastic kits with a star wars theme. Browse through Amazon and examine their range, with quick delivery and easy on line ordering it has to be a good buy! Don't forget you can also arrange for Amazon to gift wrap your parcel which means no unforeseen problems when the mailman arrives.

The following reviews are made by my twelve year old son who is Lego mad and also Star wars mad which means I trudge round yard sales looking for unused items from the 1970s and 1980s. as he collects "originals" as well as Lego.

The good thing about this, from a present perspective is that kids are happy having more than one set, we have four! 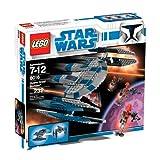 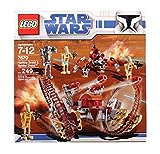 The descriptions in this hub came from a 12 year old English boy. Please check the packs as sometimes European batches are not the same as in the UK.

I hope I have been able to capture some of the enthusiasm felt by children and young people when they play with their lego. It's not only the building of the item but the playing with it. Pretend battles take place across our sitting room floor. My polished surfaces are covered in lego battleships and fighters. I would not have it any other way.

Just a word of warning if you are thinking of a christmas or holiday present. Buy your items early. At peak times everything seems to be sold out. We went to view the new ships today (it is September!)