Does your little girl dream of being a princess? Marrying the handsome prince in a magnificent cathedral dressed in the finest gown!

Maybe it's not only the little girls who will sigh with envy as Kate Middleton walks up the Aisle at Westminster Cathedral on the arm of the handsome Prince William.

One of Kate's most difficult decisions must be the dress which will be assessed within moments of her leaving the state carriage and no doubt compared to the beautiful dress which her late mother in law, Diana, Princess of Wales, wore. 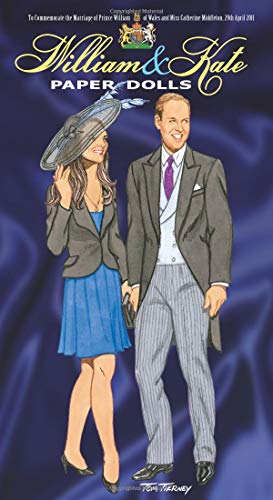 To keep your child's impatience at bay you can now buy a dress up dolly book. You will remember those books where there were cut out clothes which you hooked over the cardboard doll, changing outfits and styles as you wished.

Maybe its not your child's impatience, but yours, being able to change the outfits before the big day may take some of the strain of waiting away.

Apart from a spell of war service Tierney's career centered around the fashion industry as an illustrator. His first book was published  in 1976 after he had spent the  previous year working on a unique Christmas present for his mother which turned put to be a book of paper dolls of 1930's movie stars. Of his dolls he says, " they can be artistic, vital and alive and can tell us much about people, the clothes they wore and the way they lived."

Tom Tierney has produced a large range of similar books on different subjects.- these include Medieval costumes, Barack Obama and in 2001 he produced Elizabeth the Queen Mother for her 100th birthday. The illustrations have in the past been crisp with sharp graphics. Readership of these books is 5+ with a large amount of collectors being adult, either reliving the memories of their childhood or simply living what they wished they had played with. For display purposes this can make an interesting addition to your collection.