Having read much about these prized collector items, I have heard many stories of how they came into being. My favorite is the story about a World War I airman that was forced to land behind enemy lines and was then captured by the Germans. They stripped him of all belongings, except a coin he kept in a leather pouch around his neck.

The coin had been given to him by a lieutenant he previously served with, in memorial of their time served together. Valuable only from a metallurgical point of view,  it was no more than a trinket to the Germans so they allowed the airman to keep it, not knowing how it would save the man's life.

During the night, the British bombed the camp he was being taken to, and he managed to escape in the confusion, and landed in the hands of a French patrol. Saved at last ... or was he?

As luck would have it, they thought he was a German spy. As the German's had taken away the airman's uniform and identification, there was little he could do to prove he was an American soldier... and so, they prepared to execute him. From prisoner to death row ... all in a matter of hours.

Desperate to prove his identity, the man pulled the coin from his leather pouch and presented it to his french captors. One of the Frenchmen recognized the insignia as that of an air unit from the US. Though this wasn't proof of the man's origin it caused enough of a delay for the French to stay the man's execution until his identity could be confirmed.

Upon confirmation, the airman was cleared of all charges and returned to America, where he went on to tell the harrowing tale of his captivity. He equated his safe return to the coin in his leather pouch and this went on to create a tradition whereas other men of the US Armed Services would carry such a coin for their own bit of 'good luck'

This started a long tradition where challenge coins were handed out to all members of the US Armed Services, to aid in proving their identity should they ever be captured behind enemy lines.

Of course, there are no hard facts to determine if this story is true, but traditions often need a bit of folklore to get them started.

Back in the day they were handed to all servicemen, bonding them all together as members of the US Armed Forces. However, over time the coins would take on a new context.

In wars such as Vietnam and the Persian Gulf, commanders saw their man commit many valiant acts that weren't quite enough to serve them a medal, but still worthy of recognition. Seeing an opportunity to improve morale, these commanders gave their men challenge coins to recognize those efforts, with the hope it would push them (and others) to become better soldiers.This practice is still followed through onto today.

Beyond The US Military

Over the years, civilian organizations have adopted the usage of challenge coins as well. They can be found in the NFL, NASCAR, Fire Departments, Police Departments ... pretty much anywhere you have a strong camaraderie of people together striving to reach a goal together.

Other countries have adopted them as well. The Swiss now hand out challenge coins to members of the Swiss Armed Services, and the awarding of these coins has migrated onto our Canadian neighbors as well.

With so many challenge coins out there, one would wonder how long it would take before others would start collecting them. As it turns out ... not long after the first challenge coin was minted. 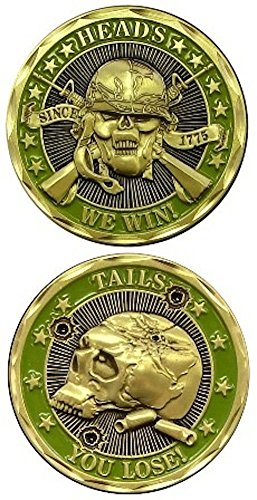 As one can only receive a challenge coin through membership in a certain organization, it stands that they all have a limited run to them, which makes them an obvious collectible. Add to that the metallurgical value of many of these coins and you'll understand why collectors are willing to shill out many dollars to own these coins.

As some have extremely limited runs they are highly prized by collectors for their rarity. For this reason It's not unusual to see a challenge coin sell for a thousand dollars or more. Of course, there are also challenge coins that are so common that they are only valued by them that possess them.

If you are considering the idea of collecting them I highly recommend that you do a lot of research on the worth of each coin before purchasing them as there are many out there who will inflate the worth of a coin to make a fast buck. Also, take some time to observe the history of these coins as many of them are quite interesting.

The Bulldog challenge coin is one of the more interesting ones, given to B-52 gunners during World War II.

Many won't know what a B-52 gunner is nowadays as the B-52 bomber has been decommissioned for many years, but back during World War II these men would fly in a pod underneath the plane and shoot at approaching fighter planes. Secured in a position that made them highly vulnerable, every salvo they returned from alive convinced them all the more that their challenge coin somehow kept them safe from harm.

As such, many held onto them until they died, and only now are they finding a market as their owner's die off, leaving them to relatives that aren't privy to coveting the coins as much as the original owners did. Any collector who manages to snag one of these has gained a prized collectible indeed, as no more will ever be manufactured, guaranteeing that their worth will continue to climb as other bulldog coins go missing.

Di You Enjoy This Article?