EyePet for the Playstation 3

This summer at the E3 video game convention in Los Angeles was when Sony introduced the EyePet to the video game crowd.  EyePet is a new pet game that uses the EyeToy camera to make a virtual pet that the user interacts with a special controller.

The pet in EyePet is incredibly cute, which is very similar to the virutal pets in most "pet" games.  You can see from the picture above that it looks like a hairy cross between a Monchichi and Gizmo from Gremlins.  You would have to live in the eighties to get those references.

What you can't see in the photo is what the EyeToy is capable of doing, which is why I have included this video that you can see below.  Note a few things.

The EyePet also uses augmented reality.  It comes with a rectangular card that is about the size of a piece of paper.  This magic card is detected by the EyeToy and becomes an interactive menu that allows you to access your EyeToy options.

From there, the magic card becomes something like a controller.  For example, you can use it as a weird X-ray to examine your EyeToy to see its condition.  If it's stomach is empty, then you know that your Eyepet is hungry.

I got a chance to try it out at the Penny Arcade Expo in Seattle Washington, and I had a lot of fun using the magic car to bathe the EyePet.  The magic card responded to my motions, and pointed me in the right direction of where to aim the spritzer.

Another interesting feature is that EyeToy allows the user to make their own toy for the EyeToy.  I realize that this doesn't make sense, but I got to try this out.  Let me explain how it worked: I draw a picture of a car on a sheet of paper, and then I let the EyeToy scan it.  It took a while for the comptuer to read it, and then EyeToy took out a sheet of paper and drew it.

EyeToy then had a real car that it could play with.  I was able to drive the toy car with the controller, and EyeToy had about as much fun as I did.  I was able to choose the material that the car was made of, and I chose wood.

So not only can the user bring a pre-made EyeToy to life, but he or she can make his or her own creations to life with nothing more than a sheet of paper and marker.

The EyeToy will be available sometime around Christmas 2009.   I imagine that the response will be huge. 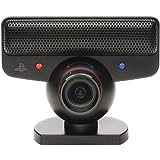