Is Fable Anniversary Worth Playing?

Based on the Original Xbox release this new remastered edition which includes the content from Fable the Lost Chapters has HD graphics. However the graphics fall short of some of the other games in the series and the game feels a little dark in places that is should not be.

The game is optimised for Smart Glass interaction. With this you can view the world map on a compatible device such as a Phone, Tablet or PC. This helps you find your way around Albion and even seasoned Fable players will find it useful.

There are allot of characters for you to interact with across Albion. This list is not exhaustive.

The Hero of Oakvale is your player character.

A young boy who looses his family, friends and home in a bandit attack.

She is the daughter of Brom and Scarlet Robe and older sister of the Hero of Oakvale.

She is the only character that appears across all the Fable games.

The mother of Theresa and the Hero of Oakvale.

She was a hero in her own right and champion of the Arena.

The father of Theresa and the Hero of Oakvale. He married Scarlet Robe after saving her life.

Maze is the one who saves the young boy who would become the Hero of Oakvale. He is actually a double agent, a Hero who is the leader of the Guild that is under the control of the Bandit Leader.

The game is easy to pick up and it teaches you the controls as your character progresses.

It actually has moved away from the old control system to the Fable 2 and 3 system so if it is your first time playing this game but have played the others you should be able to pick it up easily.

You start out as a young boy trying to earn a little money to buy your sister a Birthday Present. But after you hand the present over things take a turn for the worse and your village is attacked. You believe you are the only one to survive the attack. You head back to your house and are met by Blaze a member of the Hero's Guild. Now it is time to start your training. It is at the Guild that you will learn the games controls.

Once you have finished your training you are free to explore Albion and help its people. One of the things that lets the game down it the fact that to accept allot of Quests you need to got back to the Guild. However there are a few little tasks you can accept while just roaming around.

You will be told to head to Bowerstone after completing your first Quest from the Guild but I would spend some time exploring and finding the chests and silver keys. It would be advisable to visit Fisher Creek and learn about fishing as you will need it later. Once you save the man from some Wasps he will tell you about a Fishing Contest and teach you to fish.

As well as the Smart Glass connectivity the new version introduces achievements.

For me as someone who has played 2,3 and Journey having the chance to play the game that started it all was the big pull that got me to buy it. I was disappointed by the graphics at times as the darkness gave me trouble seeing my route around.

I enjoyed the storyline and the cut scenes were a great help filling in the blanks, but after watching them once I skipped them when I started a new game.

An OK revamp of a game that is 10 years old. There are however a few flaws but it is playable and fun.

It is also one of the cheapest releases I have come across recently less than £30 new.

Which Version do you prefer 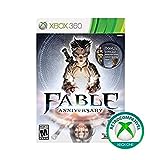