Since Zynga came out with the addicting farming game called Farmville, Facebook users have spent hours, days, months, and years of their lives planting and harvesting their virtual crops. There is something rather gratifying about building up a homestead from next to nothing and turning it into something impressive by nothing more than time and effort. We hardly can call this "work" because it can be so much fun!

I've been playing Farmville on and off for a couple years (it feels like). When my friends or family get into it, I will generally get the itch again and start harvesting and doing the more advanced things that Zynga has created for farmers achieve like mastering crops, earning ribbons, and my favorite addition to the game: making wine at your farm's winery. I've even made a penguin exhibit in the backyard of my log cabin using ponds and white hay bales to look like ice. In the last couple days, for whatever reason, I hopped back into the game. I have a level 58 farm, have earned 114 ribbons, and 100 masteries. There is so much going on at my farm that I forgot what it was like to start at the beginning. And since I don't want to lose the farm that I've spent so many hours on, I decided to try a little experiment...

I want to see how many levels I can achieve (and how much Farmville Cash I can earn) in 24 hours when starting from scratch. 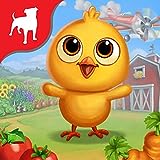 So, really the only way to conduct this experiment is by creating a new Facebook account and thus a new Farmville account. I picked a name and created a gmail account to correspond with my new Facebook persona and then fired up Farmville. Above is a screen shot of what we all started out with in the beginning...a small land area with two ready to harvest crops, two growing crops, and two plowed plots, along with 200 gold and a pat on the back. I got started right away by planting strawberries (which cost 10g to plant) and then plowed out new plots and planted more strawberries until my money ran out.

Zynga created Farmville as a game that keeps you working on your farm for hours at a time if you want. You can also plant a crop and come back later to harvest it...but if at all possible, Zynga wants you to spend your time in front of your farm (and Zynga's advertisers). So since my goal is to level up as fast as possible, no way was I going to sit there and wait for my strawberries to grow and be ready for harvest.

Neighbors are the key to a successful farm.  Now, since I just created a new Facebook account and used a fake name, I do not have any friends to ask to be my neighbors.  To solve this problem, I searched for "Farmville Friends" on Facebook and found a page that was created for the purpose of finding new Farmville friends to add as neighbors.  I simply sent out friend requests to about 30 people who had posted "add me" on this page (with "Farmville" as a personal message) and within about 10 minutes I had 5 or 6 new neighbors!  Now, the cool thing about having neighbors is that you can help them and they can help you.  You can visit their farm and earn gold and experience by fertilizing their crops, feeding their chickens, milking their cows, or many other options that can give you and them a boost.  Also, neighbors can send each other gifts like animals, trees, and parts to build buildings.

By helping out my neighbors, I earned enough gold to go back to my farm and plant an entire field of strawberries.  At this point, I am sort of stuck until my other friend requests are accepted, as you can only visit each neighbor's farm once per day to earn extra coin and experience.  One other tip that I used was to visit the Farmville "Model Farm."  This gave me a nice 500 coin bonus which will help purchase higher end items that will yield more experience and coin.

40 Minutes Into My Challenge

Level 7 and A Long Way To Go

After the initial set up of my farm and my first planted crop, I have reached level 7 with some extra coin to spare and plenty of pending friend requests out there.  There are plenty of other ways to earn Farmville levels like by collecting ribbons and earning rewards.  I also sent gifts of animals to each of my new neighbors in hopes that they would send animals back to me, which will give me more coins and also might earn me a ribbon or two in my first 24 hours if I receive enough of them.  At this point it looks like I might end up around level 15-18 before my 24 hours are up, but only time will tell.  Now if only my strawberries would grow faster...

Jump ahead four hours to when my first crop of strawberries was ready to harvest. I continued to add a few new friends to my account and add neighbors in the time that my strawberries were growing and visited their farms to get a few more coins and exp. After harvesting my strawberries, it was fairly late at night and I was ready to get some sleep. I decided to plant a crop of pumpkins, which take 8 hours to grow and award 1 exp when you plant. After I was done planting, I called it a night.

When I woke up the next morning, I went to harvest my pumpkins and sent out some more neighbor requests to the people who had accepted my friend request.  Since I was going to be on my computer for a while, I decided to plant a crop of raspberries which only take two hours to grow.  They do not however, give experience when you plant them.  The only experience you gain is by plowing the plots of land where you will be planting.  Since I was going to be on my computer and be there right when my raspberries were ready to harvest, this was the best way for me to gain some coin as well as some experience.

My goal for the rest of the day and the challenge was to gain as much experience as possible and stop at 24 hours.  I studied the possible ribbons that I could earn, which grant extra exp and coin, and decided that I could earn a lot of extra experience by buying decorations at the end of my 24 hours when I could no longer plant or harvest based on the rules of the challenge.  After harvesting my crop of raspberries, I planted another raspberry crop as well as 15 Lilacs, which take 10 hours to grow and would give the a ribbon for harvesting 15 flowers.

Going Out for the Night

As life happens, I was invited to go out with some friends for dinner and a drink.  Now, this somewhat interfered with this challenge and threw the timing off, but I found a way to get around it.  After I harvested my 2nd crop of raspberries, I planted a crop of strawberries and accepted all of the gifts that my new-found Farmville friends had sent to me.  When I returned, I would harvest my crop and use the coin I earned to buy decorations and earn ribbons to get as much experience as possible.

Now that I had planted and harvested everything that I could in 24 hours, it was time to spend the fruits (ha!) of my labor and earn some extra Farmville cash.  I wanted to do my best to be efficient in my spending and maximize the amount of experience that I could earn by buying decorations, which would also earn me ribbons.  The most beneficial way of spending some of my coin was by purchasing yellow hay bales for 100 coin.  These gave me 5 experience each and also counted toward the "Pack Rat" and "Baled Out" ribbons.  I bought 250 of these and earned every ribbon  I could as well as most of my coin back through rewards.  After I earned the blue ribbons, I sold each hay bale for 5 coin.  I proceeded to spend my coin on obtaining ribbons until there were none that I could efficiently earn.  Here are some screenshots of my ribbon book so you can see which ribbons I earned.

One thing that you can do instead of just purchasing hay bales or decorations is to plow plots of land and then delete them. Repeat this process to earn some quick exp. It costs 15 coin to plow a plot of land and you earn 1 exp point per plot of land. This is more time consuming, but will give you a slightly better return on your coin.

After I earned as many ribbons as I could, I spent the rest of my coin on yellow hay bales, then sold them, and bought a few more with the coin that I got back from the sales. If my goal was to keep earning farmville cash and leveling this farm, I would not totally bankrupt myself, but since this challenge was over in 24 hours I had no reason to keep going with my farm.  Now for the next step...using my Farmville cash!

After 24 hours, I reached level 17 and acquired 21 Farmville cash. Not too shabby for one days work. Now, since Farmville allows you to spend your Farmville cash on items and send them to your neighbors, I made my real account a neighbor of this account so I could send myself something nice. After I tried to send myself a mallard duck, I found that my real account wasn't on my list of neighbors. I am not sure if this is a glitch or if it just takes a little while for new neighbors to show up. I will check back on this account in a day or so and see if my account shows up.

Update: Apparently it just takes a couple hours for new neighbors to show up, I logged back in and checked and I was able to send myself a couple gifts using my newly created account. See the pictures to the right to see what I received and what messages pop up when sending a gift to someone.

So if there is a new item out there that you really want but don't want to spend the Farmville cash on, create a new account and as long as you can send the item as a gift, you can send it to yourself after a little bit of work.  Enjoy :)