Favorite Family Game for All Ages

I Wonder Why Grandma is Upset...

The Way to Play the Game

Usually, we started with the youngest child. They had to say "I packed my grandma's suitcase with an " _______. It always had to be "an", because the game starts with something that begins with "A". Let's use, for our example game, the word "anteater".

The game continues that way, until the alphabet is exhausted. If a player misses one of the items in the alphabetical list, they are "out of the game".

Of course, we helped the little ones a lot, and everyone had a great time!

P.S. Don't be surprised if the children beat you - they have a lot less to remember than we do!

I Packed My Grandma's Suitcase

Invariably, when I packed my offspring into our vehicle for a jaunt or a journey, someone wanted to play this game. It is simple enough even for toddlers to enjoy, and never failed to bring some joy to our excursion, as we all found some very strange things to pack into "Grandma's" suitcase.

Since the game is a product of imagination, any items will do. They can be large, or small - real or imaginary - animal, mineral or vegetable - tangible or intangible.

Some of the things that we chose, fell into the categories of:

The game can be played with only two people or a crowd of people. Often, when driving home from my store, one granddaughter and I almost managed to get through the entire alphabet - and the trip only takes about six minutes. We played it as fast as we could, but we never quite made it to "Z" before we had to get out of the car.

Suggestions for A, B, an C

We could go on and on, and I am sure you can come up with more!

Don't Get Too Technical

Sometimes, other people want to get "technical" with this game. Don't let them - it will spoil it for everyone, especially for the youngsters.

Of course you cannot put an elephant into a suitcase, or clouds, or memories, or "nothing", or a cup of coffee. That's ridiculous! Part of the fun of the game, is that children and adults alike can let their imaginations have free-roam. Anything they can think of that starts with the letter in the alphabet that they have to apply when it is their turn - works!

How droll, to think of a porcupine in a suitcase with a balloon, or a cat with a mouse, or French fries with icicles. Keep it light, and keep it going.

Suggestions for D,E, and F

Not just for children or car trips!

Before you scratch this entertaining game off your list of games to play, I thought I had better tell you that "I Packed My Grandma's Suitcase" is not just for families, children, or car journeys.

At any gathering of people, it is one game that can be played without:

That is one thing that makes "I Packed My Grandma's Suitcase" so easy to play, and once you learn it, you will want to play it again and again.

Cast your vote for "I Packed My Grandma's Suitcase"

Have you ever played "I Packed My Grandma's Suitcase" or - what do you think?

It's a BRAIN Game!

Before you dismiss this game as foolish nonsense, let's look at a few more reasons why you should be playing it.

In order for those little neurons to keep racing around inside your head, sparking the neurotransmitters in your brain functioning properly, they need stimulation.

One of my sons is determined to get his brain stimulated at least once a day, by playing video games. Well, he is a grown man, and limits himself, so I cannot object to his recreation. There is a lot of evidence today that shows the brain is stimulated that way.

However, when playing "I Packed My Grandma's Suitcase", you do not need a computer, a monitor, a cell phone, or anything else --- just your brain.

Try playing it all by yourself. You might just be surprised how hard it is, the first time, to remember the words - in alphabetical order - that you chose...YOURSELF!

Are you ready to play?

More Exercise For Your Brain! 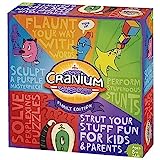 Cranium Family Edition
Here is another great game you can play with your family, although it is not as easy as "I Packed My Grandma's Suitcase". The game is simply lots of fun for anyone 8 years of age or older. I can attest to what a great game it is, as my family played it a lot! Players can draw, sculpt, sketch, and guess their way though it, and it is sure to be a hilarious journey! My "tribe" loved playing it, and learned a lot of interesting things we didn't know while we were doing it, too.
Buy Now

Are Your Wheels Spinning, Yet?

Well, are you getting a hankering to play the game? Believe it or not - the children do it better than the adults, as I stated earlier.

At a party, this is really a lot of fun, especially for those who have never played it before. Not only does it make people think - which does not go on a lot at most parties, but very often, the party-goers will learn a lot of new words they didn't even know EXISTED!

If you are confused, you are NOT alone. Here are the definitions:

A xenosaurus is a lizard that is found in Mexico and Guatemala. There are several different types in the species. They all belong to the family called Xenosauridae.

A xylologist, is a person who studies wood, specifically, the "gross and minute structure of wood", according to its definition.

At the end, with Y, Z and Double Letters, too!

Yegg? What is a yegg?

Ah, that is one of my favorite short words!

A YEGG, is a slang term for a safe cracker. It is not used much, but that's what it is!

For the pink octopus, the credit goes to: tobian.DeviantArt.com

Credit to: Vladimir Zuñiga for the lion and the king: Foca.tk

Many thanks also, to:

* Altered by Emily Tack from clip art in public domain