Final fantasy 15 is an open world action role-playing game made by Square Enix, for Play Station 4 and Xbox one. Final fantasy 15 looks amazing and it has all final fantasy fans, like myself, jumping for joy and shaking from excitement.

The final fantasy 15 story takes place in the world of Eos and isn’t it a beautiful world. All the world's countries except the kingdom of Lucis are under the control of the empire of Niflheim. Noctis the heir to the Lucian throne, goes on the mission to retake his kingdom and its magical crystal after it is seized by Niflheim on the night before peace negotiations between the two nations. The game has an open-world environment and action-based battle system similar to Type-0, fitting in the ability to switch weapons and other elements such as vehicle travel and camping.

The movie Final Fantasy Kingsglaive released July 9th, 2016 has given final fantasy 15 a story before the players have even put it in their consoles. The movie takes place in the same time of the beginning of final fantasy 15 showing the fall of the kingdom of Lucis into the Niflheim nation hands. So before you have even started your game you know that you are going to go on a quest to reclaim your kingdom and set the world straight, which I think is amazing. Flawless marketing skills by Square Enix. Let’s get back to the game.

Now that you know a bit about the story, let me just say that the way this game looks and how it plays is wonderful. The landscapes are absolutely beautiful and rich with color. Final fantasy 15 will also have soundtracks from the other final fantasy games that you can listen to while you drive, so you can reminisce about the past games.

Final fantasy 15 also has summons like many of the other games but this time they are called Astrals, and they are magnificent. They are huge and powerful, dealing mountains of damage and they are ready to be collected by you if you can defeat them. I am looking forward to finding them all.

The gameplay of final fantasy 15 is great, you have an open world to explore right from the beginning of the game. The main quest is 40 – 50 hours long and the overall game with all side quest included is about 200 hours of gameplay. The battle system is turn-based for battling enemies as well as Active Time Battle. Final fantasy 15 battle system combines turn-by-turn fighting with actions that require you to react instantly in the moment.

Overall I fully believe that final fantasy 15 will be amazing to play and will have players to never want to put their controls down. 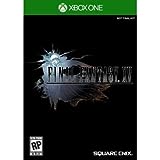