Are your kids into anything Harry Potter? These uber cool Harry Potter games are great for muggle family game night. The board games let you interact with the classic JK Rowling stories in a whole new way.

Discover the secrets of Hogwarts in this version of the classic Mystery game. Enjoy new game play features and a moving Hogwarts game board. Dark magic has been performed at Hogwarts. A fellow student has vanished from the famous School of Witchcraft and Wizardry--and it is up to you to solve the mysterious disappearance. Play as Harry, Ron, Hermione, Ginny, Luna or Neville and try to discover who did it, what spell or item they used, and where the student was attacked. Was it Draco Malfoy with a Sleeping Draught in the Owlery? Move around Hogwarts making suggestions--but watch out. Wheels on the board actually move to reveal secret passages, hidden staircases, and even the Dark Mark. Think you've gathered all the facts you need? Go to Dumbledore's office to make your final accusation to win the game.

Hold onto your Nimbus 2000! The popular, mind reading 20 Questions electronic game from Radica now allows you to square off on all things Harry Potter. You'll score major house points if you can outsmart the artificial intelligence gizmo on people, places, and things from all seven of the Harry Potter books. Simply think of something related to the wizard's world and then give honest answers to 20 questions that the game asks. Answering "yes," "no," "unknown," or "sometimes" to each question prompts another query or a guess by the device. If you choose an obscure enough person, place, or item, you just might beat the game. 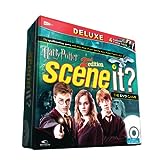 The popular board game that has players watching video clips and shouting out answers is now available in an upgraded Harry Potter theme. This second edition of Screenlife’s Scene It? Harry Potter game is chock full of questions, characters, and clips from the first five Harry Potter movies. Yes, that includes the recently released Order of the Phoenix.Pop the game’s DVD into your player to start the magic and mayhem. Loaded with new clips and puzzles, this version touches on "The Boy Who Lived" to "He Who Must Not Be Named" and all things in between. There are over 1,000 questions on the 160 trivia cards, so even if you see the same snippet from the 180 on the DVD during the same game, the question about that scene will be different. Special technology randomizes the order of the clips to ensure fresh fun each time the game is played.The themed, interactive game board can be spread out for longer games, or folded when you don’t have a lot of time (or players). To help you move around the board there are four metal player tokens (Fawkes, Buckbeak, the Knight Bus, and the Durmstrang ship), one six-sided die to determine how many spaces to move, and one eight-sided die that determines the category to be played. Once the dice have been rolled, clips are watched, questions are asked, and it’s revealed just how true a fan you are. Categories span from Colin’s Camera (trying to determine an item before the picture is fully developed) to Hagrid’s Hut (naming one of the many magical creatures) and from Divination (identifying the character in the crystal ball) to many more.

Was it Ron Weasley with the Wingardium Leviosa spell in Filch's office? Or was it Draco Malfoy with the Alohomora spell in the Transfiguration class? If it seems that the Mystery at Hogwarts Game bears more than a passing resemblance to Clue, the classic detective game, you're not imagining things or under the spell of Goyle's Forgetfulness potion. With colorful and stylish game equipment, Mattel has melded the world of J.K. Rowling and Master Potter with the realm of the Brothers Parker and Professor Plum. Players move about the representation of the Hogwarts School of Witchcraft and Wizardry to determine which three cards are contained in Fluffy's folder. Additional features include a roaming ghost, which can send players back to Start, and certain Hogwarts emblems on the dice that allow a peek at opponents' cards. The Mystery at Hogwarts Game is an attractive and well-designed (if not exactly original) deduction game tie-in to the publishing phenomenon. It will amuse fans more partial to Miss Granger than Mr. Green.

It's time to head back to school. And if that school is Hogwarts, there are a few special supplies students will need for their classes. In this board game, players race around to visit the six shops in Diagon Alley and load their trunks with required school supplies: an owl, wand, potion bottle, robe, book, and cauldron. Move fast, though, because items sell out, stores close, and opponents can slow you down--or, worse, steal your supplies--with magic spells. The use of pointy hats as playing pieces and wizard's money from Gringott's Bank gives added fun to the game's theme.

Your objective is to score more goals than the opposing player. Then after the announcer says the number of points each side has, The golden snitch pops out of the high tower.

Harry Potter and The Sorcerer's Stone -- The Game

Harry Potter and his pal Ron Weasley have crashed their car into the Whomping Willow. Now it's your turn to help them rescue their luggage. The electronic willow is easily assembled, in either easy or more difficult mode, and there are three ways to play: race the clock, collect a set of luggage, or collect the most pieces. There are enough pieces of luggage (which include school books, owls, and suitcases) and rescue cars for up to four players. Much like the classic Barrel of Monkeys, players use the antennae of flying cars to scoop up the luggage hanging from the branches of the wiggling and creaking tree (it makes some pretty creepy noises). Play can be made even more difficult by changing the mode of play to a more random "whomping" pattern, which is more unpredictable than the default play. The game is fun and challenging, great for muggle children 5 years old and older. Requires three AA batteries (not included).