Last 2013, toy manufacturer Hotwheels made millions of diecast collectors happy by releasing the first batch of their Retro Entertainment line. This series is called as such because the lineup contains iconic cars that appeared in popular movies and TV series of the 80s.

Diecast collectors who grew up in that era would obviously try to grab the first wave of Hotwheels Retro Entertainment line – this being the movie and TV cars featured on the first release is a huge part of their childhood. In simpler terms, it brings back nostalgic memories.

Another reason why the first wave of Hotwheels movie car lineup is a big hit is because of the car replica selection and representation. It featured cars that have been on the wish-list of many collectors for the longest time. Additionally, certain famous movie cars that have only been released exclusively on foreign markets or on conventions are also included – with a better version (having rubber tires and excellent packaging).

The first wave of Hotwheels retro entertainment lineup is a huge success that it made collectors scoured both online and local toy stores just to get one. Ironically, aside from collectors, it also attracted hoarders and opportunistic hoarders whose intention is to deplete supply and re-sale it at over inflated prices.

The Retro Entertainment was also initially seen as a one-time occurrence. However, with its huge commercial success, the company opted to make their movie car series an ongoing part of their annual lineup

Unfortunately, there is a huge drawback to this. Obviously, not all famous movies have iconic cars. There are only a select few of vehicles that impacted an impression on the viewer (Herbie, Ecto1, KITT, The Fast and The Furious vehicles, etc...) Because of this, Hotwheels have to put in mediocre or obscure vehicles (like who would really care to collect the black van used in kidnapping good ol' Blue the film Old School).

Aside from including "not-so-popular" film cars, the company has to re-release vehicles that was included in previous series (*cough Dom's Charger cough*) just to fill-in five car lineup.

Anyway, even though there are some downside to Hotwheels' Retro Entertainment line, there are some famous cars that would certainly be a great addition to anyone's movie car collection.

This Retro Entertainment guide aims to list all diecast replicas that was released in Hotwheels' movie car series. The tables below will be divided into columns and section for easy reference of the reader. 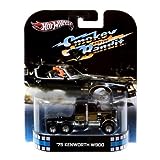