How to Choose the Best Indoor RC Helicopter

When my son was seven years old he became enamored with virtually everything that flew. He loved to watch planes take off from the airport and glued his eyes to the television whenever helicopters were featured on a show.

It was no surprise when he found tiny radio control helicopters while walking down the toy aisle at Target one day. Of course, I thought he would forget about them as soon as we diverted his attention, but I was wrong!

He vividly recalled virtually every aspect of this life-altering trip to the store. For weeks he would talk incessantly about flying. He begged me to find videos of the toy in action on Youtube and he would watch them over and over and over.

His birthday was only a few short weeks away and I knew it would make a fabulous gift - if only we could survive the non-stop helicopter conversations that long!

A few days before his birthday, I braved the crowds and fought my way through the screaming kids in the toy aisle to buy his first remote control helicopter.

Walking up to the register, I knew he would be ecstatic when he unwrapped it. Unfortunately, I wrongly believed that it was a good product! After all, the kids on the packaging were smiling and I had seen enough promotional videos (thanks to my Youtube-watching, OCD son) that I knew kids his age could fly them in the tight confines of the house.

I happily noted that the packaging said that the toy was repairable. I was even more convinced that this was the perfect gift for my young, aspiring aviator!

Boy, was I wrong!

Within a few minutes of opening the package and setting off for its maiden flight, an inadvertent collision with the ceiling and a long drop to the coffee table necessitated repairs. Good thing the packaging claimed it was repairable, right? Wrong! Only a few parts of the toy are repairable and even if you do effect the repair, you will be lucky if it ever flies right again.

With my son begging for another one, I went to the internet and researched the best indoor RC helicopters.

The first thing I learned was that the toys sold in the big-box retailers were just that - "toys." They are considered to be "toy-grade" and are not designed to have a long, useful life. Why sell them then, right?

The quality that I was looking for was called "hobby grade" and could be purchased at - you guessed it - hobby stores. These were built using quality materials and were designed to be operated for a long, long time.

I visited Pacific Coast Hobbies, in Los Angeles, California and told the clerks the story of my toy-grade helicopter fiasco. They politely nodded their heads, smiled and told me that poor consumer experiences with the big-box toys led many people to their store.

"Were these truly repairable," I asked?

I was skeptical (to say the least) until they showed me the wall of replacement parts available. Literally, every single piece on the helicopter could be fixed. The clerks noted that I could build one from scratch using the parts on the wall. 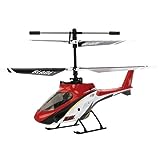 The clerks spent time to show me the various helicopter options. Since my son was still young, they guided me to the Blade mCX2. I am extremely glad I followed their advice!

This helicopter has a coaxial, counter-rotating rotor. What does that mean to you? It makes it a lot easier to fly! After a bit of practice, my son and I were able to fly it around the room and land without causing damage. It didn't take long before we started to test our skills by flying it under the table and attempting to land on increasingly smaller targets.

It was an absolute blast!

It is important to note that there are two versions of this helicopter available, BNF and RTF.

RTF is short for "Ready to Fly." It signifies that that a controller comes with it.

On the other hand, BNF is short for "Bind and Fly" and means that you will need to provide your own radio to control the aircraft. BNF is a wise choice if you already own a radio that can bind to the Spektrum 2.4GHz DSM2 receiver.

After mastering the mCX2, I took another trip to my new favorite store and asked about the next helicopter to offer some additional challenges.

A few minutes later and I was the proud owner of the Blade mSR! This beauty was a lot more challenging. It was a single blade rotor with a more powerful motor. This was like moving from a Honda Accord to a Ferrari! It had a powerful kick to it, especially when my son took it out of training mode.

With the extra speed and sensitivity, I was extremely glad that there was ample supply of spare parts available! Even after a few horrific collisions, I have only had to make one small (and very simple) repair. Unfortunately, I don't think the dog will ever forgive us! He still runs to the other room every time he hears the motor start up!

So, How do you Choose?

Look at the following factors when making your decision on the best indoor helicopter: