The History of Dragons

You'll find the history of dragons in various legends and folklore. Dragons typically come with lizard or reptilian traits and can come from two different cultures. There is the European Dragon and the Chinese Dragon. Both have qualities distinctive to their originating cultures. While these cultural traditions seem to have originated separately from one another, they both seem to have some similarities.

The European Style Dragon is typically a serpentine beast with an elongated neck, a diamond shaped head, and a long tail. However, European dragons can also be winged flyers or land-bound cave dwellers. Some may have feathery wings, others bat like leathery ones, some have spikes or horns while others have spikey spines.

Tales of European dragons can be found in the myth and folklore of many, many cultures including German, Slavic, Roman, Celtic, Basque, Catalan and Italian. This type of dragon is the most commonly seen in movies and can be found in movies such as Lord of the Rings, How to Train Your Dragon, Reign of Fire, Dragonheart and Eragon.

Description of the Adventurous European Dragon

Dragons have been present in Chinese art for thousands of years. The mix of animal features are always present in a traditional piece of artwork or design and thanks to a very diligent and dedicated scholar known as Wang Fu, between 206 B.C. and 222 A.D. those highly complex stages of a dragon's growth and feature details were finally translated.

The greatest part about dragons is that they can symbolize anything and indeed do, in their respective cultures and folklore. Some dragons are eternal guards for piles of treasure, others are unruly overlords who terrorize their local humanfolk. There are dragon nemesis' and dragon saviors, dragons who reign in terror and others who reign with a kind gentle claw. Dragons can be symbols of luck, strength, bravery, endurance, power and protection.

The symbolism of dragon protection is why no child in my family beds down without their trusty huggable dragon plushie by their side. 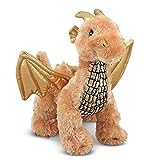 What is your favorite type of Dragon?

A Baby Girl and her Dragon

Do you love dragons?