Kidkraft Train Tables - A Great Gift for Any Young Child!

If you've ever paid a lot of money for a large gift only to have your child get tired of it after about a week, you'll understand why a Kidkraft train table is such a great value. It's much more than just a train set on a table; each set includes a variety of vehicles, buildings, and people that your kids can use to act out their own stories. There are several different Kidkraft train tables available. Here are a few you might want to consider:

If your child is between the ages of two and three, the Circo train table by Kidkraft is undoubtedly the best choice. Most Kidkraft train tables have small parts, so they aren't recommended for kids under three. The Circo set doesn't have any really small pieces. If you decide to purchase this train table for a child, be sure to check to see if the train set and pieces are included. Sometimes the table is sold separately.

This set has a construction site with a crane and bulldozer, a semi truck, a pond with a boat, a hospital and ambulance, a fire station and firetruck, an airport and helipad complete with airplane and helicopter, a farm with three animals, and of course, a train. There is a big red bridge that passes over two sections of track. As with all of these sets, there is also an assortment of trees and road signs. 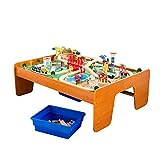 The Kidkraft Waterfall Mountain train table has a mountain in one corner that has a waterfall flowing over it. There are two tunnels through the mountain. Some of the highlights of this set include a school bus, a police station and police officer, a fire station and firetruck, an airport with a helicopter and airplane, a red suspension bridge, a crane, and a brightly-colored train with three freight cars. 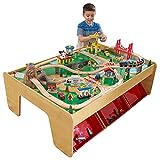 The Rising City set from Kidkraft features a large, elevated loop of track and a tall building with a helipad on top. There is a basketball court, an airport with an airplane and a helicopter, and a construction site. The train has a yellow engine, a coal car, and a flatbed freight car with freight. Other vehicles include a taxi, police car, firetruck, and a bulldozer.

The Kidkraft Metropolis train table set has a blacktop road for cars and a separate track for the train. Of course, your can run other vehicles on the track as well. There is a tall, red bridge as well as a smaller bridge. There is also a mountain with a tunnel passing through it.

The Roundhouse train table and train set from Kidkraft has one feature that isn't included in any of the other Kidkraft sets: a roundhouse. The roundhouse consists of a turntable that allows you to switch the train between different tracks and garage with three bays--one for the engine and each car on the train. There is also a two-level red bridge in this set, as well as a coal mine.

The Espresso train table has a large elevated loop of railroad track that has a steep uphill incline and makes a full circle and a half before gradually lowering back down to table level. The airport has a helipad and comes with both an airplane and a helicopter. A construction site with a large crane dominates one end of the table, and the loop takes up most of the other end. In addition to the train, other vehicles such as a bulldozer are also included.

The Kidkraft train table with construction train set is really a simple design. The track makes a small circuit in the center of the table, with a second, larger loop cutting through the middle and then up, over, and back around to join with the first loop. A blacktop road makes a complete loop all the way around the outside of the train track. There is a construction site in the center of the set.

As you've probably already guessed, the Great Height train set has some elevated track. There is a very long stone bridge that spans one entire side of the table. Some of the other features of this set include a construction set and an airport. As with all of the Kidkraft train sets, you'll get more than just a train for your kids to play with. There are buildings, cars, and people as well.