My son loves to build with Lego blocks, and I'm always trying to think of new and fun ways to use them and inspire his creativity. Recently, I invented a LEGO Challenge game to both inspire his imagination and build some basic skills.

In the LEGO Challenge game, my son and I challenge each other to build specific things out of our Lego Duplo blocks. As part of each challenge, we specify what to build and give some parameters about what has to be included in the final creation.

For example, I could challenge him to build a doughnut shop and require that he use four blue square blocks and two yellow rectangle blocks. Anything goes!

We recently played LEGO Challenge and had some pretty amazing results. My son is five years old, and we spent almost an hour playing this game (which is a really long time for a boy that age!).

First, I challenged him to build a flying car. I asked him to use at least five square blocks and three blue blocks of any shape. His final creation had a cockpit and wheels, and it even had a pilot. He took what I asked him to do and made it more creative. By the time he was finished, he was telling me all about where the flying car was going. Hello, creativity! 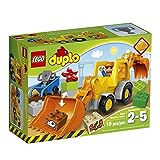 Next, he challenged me to build a house for a little Lego figurine holding an umbrella. The house had to have a boat, some "guests", a tree (which he built and handed to me), five green blocks and three yellow blocks. I was amazed at his challenge, but I managed to put it all together. We laughed about what the characters were doing in the house, and why the girl was holding an umbrella inside her house (same reason as why the other guy is in a boat - there's water in the house!).

Then it was my turn, and I challenged him to build a monument with at least seven rectangle blocks. After some discussion about what monuments looked like, he built one of his own design.

Next he asked me to build an office for a Lego "office worker". The office had to contain a window block and a roof block. I added some "filing cabinets" behind the worker, and we talked about what is found in an office.

For more fun Lego activities, check this out!

Finally, we together built a pirate ship, which contained a treasure chest and two pirates. We laughed about what could be in the treasure chest. Jewels? A puppy? Popcorn? The captain's parrot?

This same activity can be expanded in many ways. For example, in each challenge listed above, we ended up telling a story or learning about the item. When I asked my son to build a monument, he wasn't sure exactly what that was. So I gave him some examples that I knew he had seen, and he got excited about designing his own monument. He learned about monuments and architecture at the same time!

With some easy prompts, LEGO Challenge can inspire both creativity and a lot of fun!