The Super Heroes theme was officially introduced in January 2012, but promotional sets were released in 2011. This theme would include two of the largest comic book companies stock of characters and put them into one LEGO Super Hero Universe. Marvel and DC comics willingness to licence their intellectual property under the same company show an enormous respect for LEGO and appreciation for their comic book fans. The individual building sets were based on the respective companies property, but LEGO is all about mixing and matching, so there is nothing stopping you from having your favorite heroes from the Marvel and DC universe meet up and join forces.

The LEGO superhero building sets were not only based on the comic books in which these characters were first created, but also the movies that have brought them to a larger audience. The models are mostly comprised of the standard building sets, which are based on vehicles, locations and events. However, this theme would also introduce the Ultrabuild sets. The Ultrabuild sets are basically buildable action-figures. There are many liberties taken with the characters’ design, because LEGO put priority on the figures’ movement capabilities and preserve the LEGO system of being able to interchange and combine different model pieces.

It should come as no surprise that with so many superhero video games, that LEGO would release their own video games based on their popular Super Heroes theme.

Before LEGO acquired the rights to the larger DC Universe, they were building sets for Batman. LEGO would also release a video game based on the heroes and villains found in his storyline. The sequel to LEGO Batman would incorporate many of the popular characters in DC Comics and tie in with their recently introduced Super Heroes theme, which included most of the popular DC characters. One of the biggest talking points of this installment was the use of voice acting. This was a big departure from the LEGO grunts used in previous games. The plot revolves around the Joker creating a synthetic Kryptonite that can power Lex Luthor’s gun he calls The Deconstructor. The Deconstructor has the power to destroy any black brick. The weapon is used to break the inmates out of Arkham Asylum, destroy the Batcave and wreak havoc on the city of Gotham. This would be one of the few original stories created for a LEGO video game based on a licensed them. Up until this point, the plots revolved around the different movies that inspired the building sets.

With DC getting their own LEGO title, it was time for Marvel Comics to get their shot. The gameplay is much the same as we have seen in previous LEGO titles, but there's a lot of interest in the Hulk. His character will be significantly larger than the other “mini”figures in the game. The story revolves around the the Silver Surfer’s surfboard shattering into Cosmic Bricks, after he falls from the sky. Dr. Doom recruits several supervillains to collect these pieces, so that he can build a powerful Doom Ray. Nick Fury has S.H.I.E.L.D assemble Earth’s mightiest superheroes to locate and retrieve these Cosmic Bricks before they fall into the wrong hands. However, unlike the Avengers’ movie, LEGO has the rights to popular characters like Spider-Man, Fantastic Four and the X-Men.

Instead of cramming all the LEGO Super Heroes sets onto one page, I have divided them up according to the year they were released. The individual building set names and item numbers are listed below. If you wish to learn more about the sets released, you can click on the links. There will be information, fun trivia and lots of pictures. These links will be available as they are published.

(Pro): Promotional Sets were only available at certain locations or given away at special events. 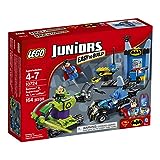