Slave 1 was the spaceship piloted by both Jango Fett and his son Boba Fett in the Star Wars saga; the ship appeared in the movies Episode II; Attack of the Clones, Episode V and The Empire Strikes Back - having had many modifications made by Boba Fett after he came into possession of the ship.

In the Star Wars expanded Universe, Slave 1 was a modified prototype Firespray-31-class patrol and attack craft seized by Jango Fett and inherited by young Boba after his father's demise on the planet of Geonosis at the hands of Jedi Master Mace Windu.

For the complete biography of Slave 1 take a look at Wookiepedia - Slave 1.

Do you own Jango Fett's Lego Slave 1?

Jango Fett's Slave 1 is a challenging Lego model to build and once assembled is quite large (11 x 15 inches). This version of Slave 1 comes in the colours before modification by Boba Fett and this is reflected by the bricks of numerous colours contained within this Lego set.

Jango Fett's Slave 1 is a real boon for those who like their spacecraft with lots of guns; this model is armed with 2 twin blaster cannons, 2 rapid firing laser cannons and 2 projectile launchers for maximum firepower to attack your other Star Wars Lego spaceships - lots of fun for little boys (and some bigger boys too!)

Two Star Wars Lego mini figures come with Jango Fett's Slave 1 and both are only available in this set; they are Jango Fett as a Mandalorian warrior with rocket pack and a young Boba Fett before following in his father's footsteps.

Jango Fett's Lego Slave 1 has some nice little features including a pivoting cockpit that swivels in conjunction with the wings, just like the ship in the movies. There is also a smuggling compartment which connects to the ship's underside using a magnet. The front compartment of Slave 1 opens up to reveal two rockets together with a blue power core and three bombs can be stores which can be dropped by tilting up the back end. 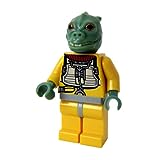 Do you own Boba Fett's Lego Slave 1?

This is the most recent Star Wars Lego Slave 1 and is by far the most stylish looking with the characteristic colour scheme applied by Boba Fett. This 573 piece Lego model requires two instruction manuals to lead the builder through the assembly and measures 13 x 13 inches once completed.

As with the Jango Fett version, Boba Fett's Lego Slave 1 is armed to the teeth with a special missile firing compartment and side-mounted flick-firing missiles as well as an array of blasters and laser canons - this is a really good set for those that like to play at starship battles.

Boba Fett's Lego Slave 1 comes with three mini figures; a new, redesigned Boba Fett with cape, bounty hunter Bossk (a mini figure only available with this Lego set) and Han Solo in a white shirt accompanied by carbonite capsule which he fits into when "frozen".

Apart from the complex missile firing compartment, this Lego version of Slave 1 has a large holding space, under the loading ramp, where Han Solo in his carbonite tomb fits nicely. Another nice feature is the opening cockpit of the ship which rotates as the ship is moved, just as it does in the movies!

Both Jango and Boba Fett are Mandalorians - you can see more Mandalorian Legos here. The Lego Star Wars Mandalorian warriors battle pack was released in early 2011 - here they are reviewed and accompanied by customized Mandalorian mini figures which are also for sale.