Looks Easy? It's Not.

I haven't played the original Mega Man for quite a number of years now, but I've played most of the other ones on the NES at various points. Man, I read that the original was hard but I was astounded at how much harder it is than the other games in the series. I mean I was shocked. It took me like an hour just to get to one of the bosses, who then quickly handed me my ass. I said thank you.

First of all, there's a lot of platforming in this game. That would be fine if the controls were as fluid as they are in Mega Man 2 or Mega Man 3 - but they aren't. The controls are terrible! I couldn't even land on a basic platform without dying when I first started playing. It's that crappy. Now, that alone would make this game a stinker, but there's more. Capcom loves to shoot projectiles at Mega Man, and you know what? They move at light speed in this game. Seriously, it's like bullets flying at you at 100 mph. It sucks!

So, I had read that the game was hard, and I sort of chuckled. I'd watched someone breeze through it on a speed run and thought that it looked pretty easy. Boy, was I wrong. You know what else? The levels are longer than they are in many other Mega Man games! So not only are they hard as nails, but they're long as crap. At least you can kind of fudge around and get energy (health) from enemies if you spend enough time respawning them. That means tediously moving back and forth within the level.

Speed Run of the Whole Game

Get This Mario T-Shirt on Amazon Right Away. All Old School Gamers Need a Shirt Like This. 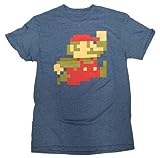 So Hard - Is It Even Worth Playing This?

So, would I recommend this game? Oh, heck yes. This is the kind of hard that gets frustrating, but it's also the kind of hard that feels rewarding. You get a real sense of accomplishment when you finally master a level to the point where you can get to the boss. Mega Man 2 spoiled us in this sense - that game is just easy in comparison to Mega Man.

It's obvious that the high degree of difficulty made the original less popular than its direct predecessor. The first game only became popular once the second game exploded. It's really our love for the Blue Bomber that makes us want to beat this game. If this was anything else than a Mega Man game, it might not be worth playing through.

Anyway, yes, the original NES Mega Man will frustrate you. You'll pull on your hair, you'll wonder why you can't get off the first screen properly, and a bunch of other stuff. You'll get mad. However, you'll slowly make progress so your frustration should turn into intense concentration. In the end, you get good at this Nintendo game. Sure, it might take a week or two to get all the stages down, but it's worth it. Mega Man 2 is a game that you can breeze through and learn in a day or two. The fun comes in when you learn how to beat the second game faster and faster. The original, though, takes real skill, and it's worth playing for that reason.

Now, I've seen a lot of people comment that the original game is easy. I think some people are forgetting that we had a lot of free time as children to learn how to beat games like this. Even skilled gamers are sure to find this one a challenge today. When you get to the point where you can breeze through the first game, then you know that you have great memorization and reaction skills. I wouldn't say that this is the hardest NES game out there, but as far as original Nintendo games go - it's definitely a difficult platformer.

Read About More Games on My Main Page

Is Mega Man a Hard Game?