According to a number of news reports on Tuesday, September 8th, 2009, Hasbro, makers of the 74-year old Monopoly game, announced that they have teamed up with Google Earth to develop an online version of the popular board game. They have developed a free, limited time, web-based version that utilizes Google Earth and Street View to turn planet Earth into one giant Monopoly game.

Hasbro describes Monopoly City Streets "a game of property empire building on an unimaginable scale in a bid to uncover the greatest property magnate the world has ever known."

In th e online version, players are allowed to construct anything on their properties, such as, castles, schools, cottages, or skyscrapers. With that in mind, it becomes fairly obvious that $200 start-up money isn't going to cut it. This online version gives you a cool $3 million to play with.

The game only allows one person to buy a property at a time and the rent is paid automatically. The Chance cards allow some cool features not found in the traditonal game. You can build sewage plants and prisons on your competitors' properties.

This Street View version is only available for a very limited time, 4 months from today's launch, as a promotion for Hasbro's "Monopoly City", a 3D version.

When it launched today, reports indicate that there was such a spike in traffic to download Monopoly City Streets, it knocked out the servers. Be patient while they try to restore everything. 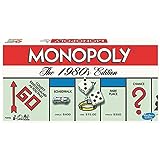