Before moving on, here is a short list of movie car diecast in the order in which they are featured on this post:

If you don't find the movie car diecast you are looking for, please feel free to visit the first or succeeding part of this series.

Drive Angry is a 2011 film that every action junkie should love. It has a lot of senseless action, gory killings, fast old muscle cars, and sexy women. Unfortunately, it received mixed reviews and did not perform well in the box office (actually it is considered a box office bomb).

Drive Angry stars Nicolas Cage and Amber Heard and is still one great action movie comparable to other action films such as Machete and Sin City.

The Losers is a 2010 film adaptation of Vertigo Comics with the same name. The film has an ensemble cast and similar with Drive Angry, the movie is an action film that has been widely panned by movie critics as too shallow and an inferior version of the A-Team film (for those who are not aware, the A-Team film was released a few months after the release date of The Losers).

Whatever anyone might say, The Losers is a great film that combined Action and Comedy. The actors are great, the plot is exciting, and has an unexpected twist at the end.

About the Drive Angry Diecast:

Bruce Almighty is one of my favorite Jim Carrey movies. In fact, I actually like his earlier works compared to the recent ones. Bruce Almighty is quite special because it featured a sleek Saleen S7. Anyone who saw the movie would definitely notice it too.

Great job Hotwheels for releasing (and will be releasing) a bunch of movie cars in their Retro Series lineup. Below are some of the ones that are already out 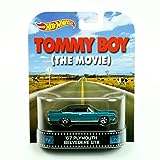 This next Hotwheels diecast is not from a movie or TV series but is quite iconic as it is the diecast replica of the Mars Rover Curiosity. For those who are not aware, Mars Rover Curiosity is the miniature robot that was sent by NASA to Mars to gather rocks and any other martian samples. I wonder if it encountered the alien friend of George on the popular TV show Bugs Bunny

Yabadadoo!!! This year, Hotwheels released another version of the Flintmobile. It is totally different from the one released before as part of a cereal promotion as that one is a color changer yet sill diecast. Frankly, I believe the first one is better but this one has a much better card design and back description.

Amazingly, Hotwheels have released a USS Enterprise diecast replica on its 2013 lineup. A lot of people surely recognizes the USS Enterprise from the TV show / movie Star Trek. Unfortunately, it is quite popular so if you spot one at the pegs, better get it as hoarders would surely want their hands on this one.

FYI please that Johnny Lightning has also produced Star Trek diecast replicas a couple of years ago. And like old manufactured toys, the Enterprise of JL would surely have a high price tag if ever you find one.

Just like the iconic diecast featured above, this one is not from a movie or TV show but rather from a popular mobile game Angry Birds. Featured here is the red bird which is actually the icon or mascot of the hit game series.

This particular diecast would also be enjoyed be by youngsters as it is quite solid and young kids are usually fond of ramming their hotwheels cars to walls or with other Hotwheels vehicles - just like in the game.

Naturally, if Hotwheels produced the hero of the mega hit game Angry Bird, they would also have to produce the game's antagonist - Minion Pig. Obviously, what would the hero be with no villain right.

Since Batman has an exclusive post regarding his batmobile diecast (See Hotwheels Movie Cars - Part 3), it is only natural for his alter ego Bruce Wayne to have an exotic collection of vehicles. Featured on the right and below are some of Bruce Wayne's cars that appeared in the movies.